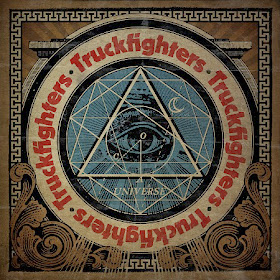 After what seemed like an interminably long five years, Truckfighters are back with the highly anticipated Universe, their conceptual opus centered around the conspiratorial machinations of clandestine forces surreptitiously orchestrating events. Despite the esoteric nature of the lyrics, however, this is an album that is made not to be over-analyzed but to be absorbed, the soundtrack to an interstellar cruise. For while the band may hail from Sweden, the metal contained within is not of this earth, but rather mined from a distant galaxy.


The serpentine riff of "Mind Control" kicks of the album and the band quickly settles into their trademark groove, a highly-tuned machine with all pistons humming with European precision.  Lurking beneath that melodic sheen, however, is something darker and fuzzier waiting to be loosed from Dango's guitar. "The Chairman" seamlessly follows and with it a bubbling bassline from Ozo that percolates like bong water. Fusion-like solos add to the complexity. Next up is lead single "Prophet", the most melodic and commercial track of the bunch. Paradoxically, a great sense of foreboding pervades the track, coming to the forefront during the massive walls of fuzz surrounding the chorus.


The hidden gem of the record is "Get Lifted".  "The beautiful soul that dies can't get out until the colours dry" sings Ozo over a hypnotic, ethereal melody until it is interrupted by a heavy growl of fuzz that becomes ever more urgent and more insistent until it finally explodes in what can only be described as a snarl.  Quick throb-fest "Convention" and the blissful "Dream Sale" set up the sprawling epic closer "Mastodont". Thematically, the song speaks of a soul being sent out to space to die, a cosmological update on the traditional Viking funeral. Intricate guitar lines build the tension like cryptic ciphers until what is created is nothing less than the most gargantuan of riffs that threatens to blow your speakers as well as your mind.  "You are the star that will glow in the dark...The same as me".  And with that, the song fades away and the Universe is over. 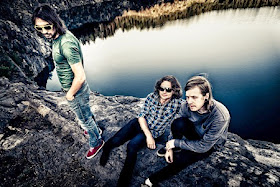