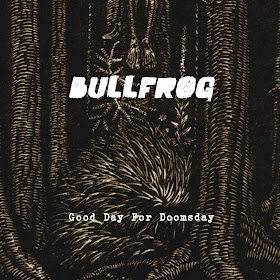 The 90's hold such pathetic nostalgia for this sludger that when I can recognize that decade's elements in contemporary music, whether it's rock or metal or that broad-brush  alternative, I tend to feel more than a sliver of agitation. No, it's not fair. Everything has an influence, everything has an origin. But the nods to Blue Cheer or MC5 are well-received, while swiping a Gruntruck chug just pisses me off. But do it right without exploiting origins and you just might dodge the vitriol of Generation Sex.

Perhaps the subtleties lend themselves to throwback delivery. Czech noise-sludge trio Bullfrog meld shimmer and churn and glaze it with sticky stoner haze on their six-track Good Day For Doomsday. Whispers of 90's buzz are effective without making reformed slackers question their choices, while the muted sludge navigates through bass-driven shifts. But it's the noise-metal pop-and-piss that'll push these twenty minutes into your weekend queue.

Between Witness and Black Car, you might think Bullfrog take one drum sequence and hit the rehash key, but give it time. Bands like Local H have made a career of returning to elemental patterns that span the tenure of an entire album. Truth is, the two tracks actually divide the record into a sort of diptych, with the latter rising from the ashes of the former to introduce the album's heel-dug back end. Where Witness is a sullen, drum-led buzz abrasion, Black Car is more bubbly, more inviting. Both benefit from shattered guitar shards, yet the true triumph here is how two tracks can define an album when they separate so much from one another.

The bouncing mud-meters of Garbage Collector antagonize us, poking a stick just deep enough to piss us off without a draw of blood. The stagger is a decoy, a quick-tempered, gear-shifted distraction before the low, slow hits. On Sounds From The Basement, the 90's grunge mood is highlighted via dual vocal shrieks and Tad basslines. It's a cool amalgam, cruising with confidence but scraping with angst. But what am I hearing? There's an influence I can't detect. So there's that subtlety.

Quick, abrupt, and wholly jarring is Turbo Rabbit, a filthy trench tour that stays low and enjoys itself more than sludge really should. But before long we realize this is an intermission of sorts, as the closing title track offers a slow doom cadence and the album's truest sludge swell. The pendulum swings and cakes its canvas with shit, slow-metered and escapist amid a near stop-start effect. When cosmic dreams develop and collapse, it's a clear homage to Failure. Hitting heavy without damaging your frame, Bullfrog assert that cool restraint is an asset. But closing with tin-can isolation is more 90's than it realizes. Here we are, cats. I'm taken back without feeling ripped off.

The more I struggle to define a band and their sound, the better they likely are. Bullfrog touched on so many brain hairs without saturating any of my five senses, so it's safe to call Good Day For Doomsday a success. All at once, spacey sludge and direct noise wear a vintage badge of approval from this sweaty flannel pioneer. The whole of the album is coated with honey, but the shifts and distorted methods pull us into a dim closet. Is this a sloppy bottle-spun handjob? Sorry. That's not what they meant by coming of age. Grow up, will ya?