Live In Japan by Leafhound! 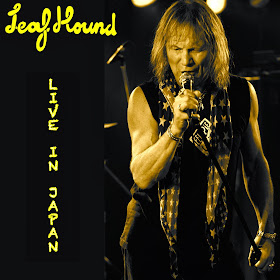 If you don't know Leafhound your father might. And that's not meant as a slight. Leafhound released their iconic album Growers of Mushroom in 1971, so the band might ring bells with the more "experienced" listeners. But younger listeners might know a song or two. Afterall, Lowrider covered their tune "Freelance Fiend" on Small Stone's Sucking in the Seventies compilation. But the influence of their back catalog is not their only contribution to modern Stoner Rock. No sir or ma'am. Leafhound are still alive and playin'. And though the lineup has changed, the voice remains. Vocalist Peter French hasn't missed a beat, still belting out his bluesy tunes with grit and conviction. And unlike most rock and roll lifers who've been in the game this long, time has been kind to his voice. Live in Japan is everything a live album should be; clean sound coupled with varied renditions of the tunes you know. Even those old school fans who've worn out Growers of Mushroom will find something new on this album, usually the expertly executed solos offered up by Luke Rayner.

Give Leaf a chance.