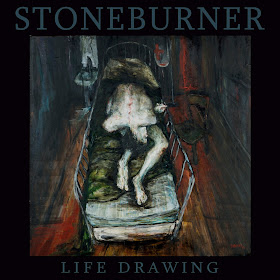 I know it's early, but who's up for a little detachment? There's more to it than putting down your smartphone or staring at linoleum as you stomp through a nearby grocery store buying frozen pizzas. Oh, long leather duster. Oh, piercing stare. Oh, greasy 2am banana-room strokebook commitment. Fuck you, man. Stop mistaking your creepiness for something it's not. Be what you are. If you're gonna creep, just creep. And when YOU detach, just keep drifting. You're not my audience and I'm a shade embarrassed we got this far to begin with.

I'll seek sweet separation in a nobler form. I can adapt and press the flesh enough to get a paycheck, but weekends require a staunch approach to release. Today's Sunday Sludge grinds convention and chokes out apathetic acceptance as Portland sludge quartet Stoneburner offer their sophomore full-length, Life Drawing, due April 15th. Spitting the stick after 2012's Sickness Will Pass is no small cuttings, and these nine tracks readily illustrate the band's commitment to an endless tension designed to breed questions more than generate sales.

There's a near-triptych formed here, ambitious and not easily attainable among unseasoned acts. Stoneburner patiently weave through three chapters and sixty-four minutes of progressive dooming sludge metal without ever repeating themselves or scratching an itch so much that it bleeds. The violent pangs and churns of Some Can's introduction permeates without the benefit of a vocal, at least for a while. So jagged, so cantankerous, attacking dark themes under thick layers of tar and weather... Whew. Frets scale and descend as bones crunch with never-ending suffering. The Molotov piss-bottle angst just won't suit the layman as he enjoys his morning paper. And THIS is why we're collected here.

Slow and bass-driven is Caged Bird, a pensive teem of jittered vein-slaps and thickened pop-and-hiss almost-throwbacks. Jesus, imagine a slick comic book detective staggering toward your city's seediest nook with an abrasive unease and you just might capture the feeling of this song. The muffled, pus-coated vocal is hardly a sidecar as shrill, jagged guitar allows no time for blood to clot. Doom upheaval blankets such trivial worries, chortling and contorting as the descent snaps softened bones like sun-dried twigs. Let's be fair, dudes... this shit was far more jarring than initially advertised!

If nine tracks span a trio of stunning sludge chapters, there's likely a breath or two, eh? The brief peace of Drift is a mortal, sodden whisper of green that's smooth, unrefined, and entirely necessary. Jaking an abrupt stumble is the imminently cold exploration of An Apology To A Friend In Need. Cavernous diversions and smooth commutes won't heal your pierced abdomen, but evident damage to your vitals is riding in the back seat. And just as Drift set us dizzy, so does Giver Of Birth. Swelling after a quick approach, we're given little time to construct a calm. The fleeting, out-of-reach peace seems to sting colder than these other tracks, don't they?

The band serves a criticism here. A focus on the zombification of what was once vibrant. Clones in cars and avatars in your heads, you fuckers. Pale New Eyes is one slow crawl of an example, underfoot stones growing sharper and sharper, advising against the hollow future you were promised. It's a sludge-groove explosion, timbersticking the sway meter with brazen vengeance only until you realize The Phoenix is a track that deserves a review all on its own. Swelling and swooning for eighteen minutes, listeners drone toward a lush soundscape bubbled with regrets. Back-masking, neck-ratcheting, mouth-gaping, this closer trims at excess and expertly pares with patience and discipline until only a fat thumb can hope to maneuver. When the skin breaks, the sludge flood is fully realized and the death rattle leave its trail. Ashes settle. Life awakens. The stir of every pregnant pause creepy-crawls between passages until the viscous denouement resolves under peppered guitar razors. This rebirth has commanded its welcome, swarming with outstretched arms and ignoring the fade.

At times quite spooky, at others downright teeth-grinding, Life Drawing is rough and seething. Repeated thrusts of your face into the soft moss of a dying log somehow protect you from the obvious: Hope and promise aren't merely stained. They've been properly diluted and washed out with thick piss. The truest of sludge deliveries opens a rusty door, but Stoneburner have invited us into our own nightmare. The deceptive lounges hardly provide comfort, and you're better off just cooperating when the rhythms crash. Get in the van and stop with the fucking questions. Yes, there IS a world this ugly.