EP Review 'Blood From A Stone' by We Hunt Buffalo 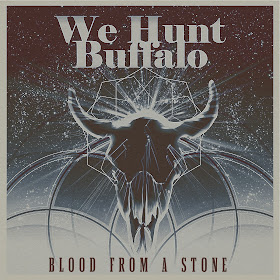 When a heavy deep misty night descends in Vancouver, BC, smothering the city in thick musty scents of depravity and treacle-like fuzz grooves, there is only one beacon of light that shines out through the night, and it comes from a band whose riffs can destroy all that lay before it. With their newest EP, We Hunt Buffalo are an unstoppable juggernaut of fuzzy riffs, long drawn out grooves, and passion deeper than a hole in the world.

Following on from their debut self-titled full length from 2012, Blood From A Stone is every stoner groove fans wet dream, at times ferocious speeding riffs, at the next, mighty slabs of groove-laden destruction.  The vocals of Ryan Forsythe have developed into an orgasmically heavy crescendo that sounds like he’s had a lifetimes worth of toil to pour out, and with continued expression, he could well become the leading voice of the genre, giving John Garcia a run for his money.

We Hunt Buffalo’s sound has changed slightly from their debut record, while they may have been praised for their experimentation with synths into the fuzz gloom, Blood From A Stone is much more raw, stripping fuzzy stoner rock down to its bare bones. But rather than taking anything away from the band, this shows how much they have to offer as songwriters, not hiding behind unique selling points, but instead just showing how utterly awesome they are at their craft.  With ‘Cobwebs’ and particularly ‘Hometown’, they do nothing shy of melting your face with wave upon wave of heavy riffs, begging you to drop to your knees, snap your neck back, and look to whatever deity you’ve fallen for, begging for heaven to be a continuous eternal riff like the one before you.

We Hunt Buffalo have incredible things awaiting them, I wouldn’t try to stand in their way if I were you.