Today marks the release of Buffalo Theory Mtl's new song "Murder Trilogy" as a "triple single". What is that you ask? For more information please read their press release: 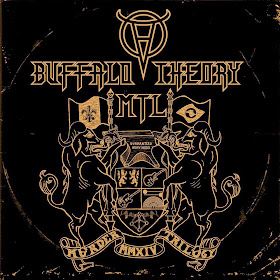 Buffalo Theory Mtl is proud to finally be releasing some brand new material in the form of a “Triple Single” that we are calling “Murder Trilogy”. We have had this idea for a while, and as far as we know this is a first for a Canadian band.

Coming from a bilingual city such as Montreal, we felt it would be a good idea to record an English (called “Disciple”) and a French (“Obsédé”) version of the song. Then, as our singer is from Brazil, we decided to record a Portuguese ( “Justiceiro” ) version as well.

The songs are connected lyrically as well through the theme of murder, each having their own twist on the story and each completing the other.

Please share the YouTube video of your favorite song so we can get them out to the most people we can! All three songs will be made available for FREE download until the end of April on our Bandcamp page.

You can expect a new EP from us before year’s end. We will be heading back to our friend Alex Blain’s studio at AlxMuzic, which is where we recorded this release.

We tried something different with these songs and we hope the fans will like it!

The song “Disciple” features special guest and our long-time partner in crime, singer Patrick Mireault from the band Ghoulunatics.

The French track has our guitar player Yannick Pilon singing lead vocals and our singer Anton Parr backing him up. They will be switching it up for the live shows as well! Stay tuned for some show announcements real soon!

"Murder Trilogy" is a full-on fist-pumping stoner metal riff fest. The unique concept of bringing three different languages/vocalists to the "song" gives each version of the song a different perspective and level of brutality. Very cool indeed. Take a listen..."