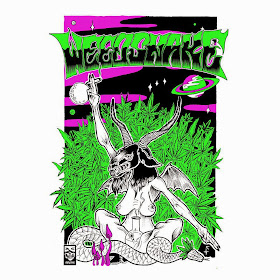 I paid full attention through three years of Spanish and still retain only the most ridiculous framework of a language native to nearly a third of the population my day job introduces. Pocket translators take a tourist only so far, but they're sufficient in translating stoner metal lyrics. Plenty can get lost in translation, but lamenting broken relationships and singing pot's high praises is a universal language of hesh and haze.

You'd expect such a smoky perspective to limit the merits any one-take live recording, but Mexico City's Weedsnake bang out an eighteen-minute smog session that may be one track or six, depending on how unzipped you are. Careening between swampy stutter-stomps and breakneck dust-ups, its clear this stoner-sludge quartet either found their moment of clarity or smoked themselves sober; you may have trouble believing this was a one-off toss of buds and buzz.

Exploring the sounds as one long track puts Weedsnake's sound in a more progressive and dichotomous key. They seem to have more time to develop their slow sludge lumber than they were offered on previous releases, 2011's self-titled debut and 2012's split with Morelia's Akûma. Rhythms shift frequently, hitting all gears seamlessly between torrid tip-overs and filthy dirge.What's consistent is the band's commitment to exploring depths, heights, and every crack in the structure.

The slow-rolling opening echoes of EYEHATEGOD are met with stoner ease and quickly interrupted by white-knuckled frontseat finger-fucks, all held tightly wound by exceptional use of tempo. When chug and churn collect enough cymbal dust, high gears blister and Erick's bark grows more urgent. Listeners will have little time to make out what he's saying, let alone what it really means. You won't be allowed to nod off and tune out. Not yet, probably not ever. The pace always lifts and this live offering is alarmingly caffeinated for stoner-sludge weed metal.

Etziel's guitar is given free reign to wander and warp, crafting a balance with the dirt-caked chops. The backwoods drag between splintered trees is littered with fuzzy snaggers, numbing and distracting from the tense, frenetic moments of thrashing sludge. When you hear Weedsnake pulling themselves from the chaotic romp, you'll find yourself sinking under a slow storm of spraying shit.

The shifts in pace make for a good time here. Live music lends itself to a bit more groove, and these muddy moments swing like pierced udders with an almost doom-y malevolence. The despondent meters are buried by trippy buzzsaw distortion, and the psychedelic space-metal whispers flicker enough to make us squint even tighter. Weedsnake don't offer much explanation, but who the fuck wants it? Why ruin a good time with analysis and interpretation? From floor to ceiling, from sticky swamp to dry desert wind... it's all here in one toke. Er, take.