New Band To Burn One To: MAGE 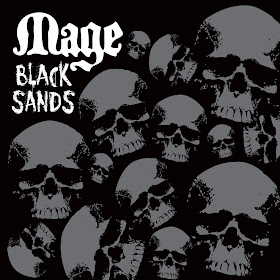 Mage. Five unholy wizards compelled by the power of the riff and dark, dark magic. Forged in dragons fire atop a lightning lashed mountain in the year of our Lord two thousand and ten. Rumbling riffs combined with finely hewn words of power to conjure up images of otherwordly things creeping forth from the darkest reccesses... *ahem* ...Sorry about that... If you have a low "fantastical bullshit" threshold, we're basically five guys who've been around in a variety of bands over the years, brought together by a shared love of "THEE RIFF" and a desire to jam and see what happens. Turns out that what happens is a heavy Stoner/Doomy/Metal type thing, but with a whole bunch of other elements thrown in. Self titled studio EP released in 2011 and full length album, Black Sands, released 2012. Come worship at the altar...

"With furious power and magnitude comes a new band from the UK, scorching the earth and laying waste to all in sight this band rules the land. This band I talk about is Mage. The music contained within their latest release "Black Sands" is a testament to the power of the riff. Combining an earth-shattering breed of devastating Stoner/Doom along side a straight forward in-your-face metal approach, the band succeeds in making a brilliant piece of work that is not only HEAVY, but also one that lays down groove and melody. Along with blazing guitars, thundering drums, rumbling bass and gruff vocals you are consumed by the ominous and dark nature of the band. Mage's debut full-length "Black Sands" is no doubt a thrilling listen through and through, but if I were to have choose a few standout tracks they would be "Cosmic Cruiser X", "Rust", "Surfing Temporal Tides" and "Witch of the Black Desert". Killer release! It comes as a very high recommendation."