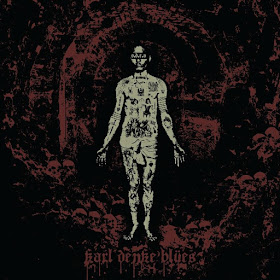 Years ago, I was in line at Binny's Beverage Depot and in quite a fuckin' hurry to scam some squirrel. The man ahead of me was clearly angry, clearly Polish, and clearly drunk. I allowed other customers to crawl toward open registers... I had to see this. I just wanted to know what shortsighted act (on the part of Binny's, surely) had extracted such ire. This bulging beast of a man said nothing I understood, but I got the fucking point. He was pissed, he wanted his money back, and the milquetoast manager on the other end of the diatribe took no issue with handing this man forty fucking dollars. To this day, I grasp only that this man couldn't rely on charm or good looks. He had to spit in universal terms of anger and discontent to drive home his piss and vinegar.

Screening new music sometimes snags on barriers between languages, so a band that transcends such boundaries is doomed for success. On Karl Denke Blües, Wroclaw's o.d.r.a have stunted my growth and snapped my neck regardless of their Slavic tilt. I don't have the time to translate what they're saying, but the point is pretty clear: blues-based, NOLA-influenced sludge metal has somehow seeped into Poland. Increasingly prolific songwriting has put o.d.r.a on the radar, but their blues-infused skull-scrapes make short work of drawing-in fans of EYEHATEGOD and Buzzov*en.

Chudy's vocals quickly become an instrument, only partially because of language gaps. Widelec Heretyka sways with seasick sludge, an immediate smack in the face that will have listeners removing headphones and checking unlocked doors. The misanthropic blues and quick-cymbal paranoia establish an expectation for listeners that's gonna do a gray-matter dance. Odrowaz enters dark seas under a cloud of poor judgment, using jacked time signatures and breaking toward a pendulum grind that sways, wanes, and shuffles behind dirty blues rhythms.

When they aren't slugging turtles, o.d.r.a amp the stoner-sludge straight out of a gearhead's garage. Gnijace Miasto's fuzzed-out chop is too fast to give a fuck about the filth. Feedback douses itself with Zywiec and slaps itself cold. Zdziczaly Lump is the album's most confidently thick-fisted stoner structure, nearly lending itself to accessibility. But the smoky infusion knocks loose the prettiest of teeth with incredibly effective, nod-pregnant tempo shifts led by Ziolko's skinlab.

At times murderous, other times plainly ominous, Karl Denke Blües might be a soundtrack to your grandfather clutching his chest. Step over this trip wire all you want, the solos will bury you. Groove gets stuck in the thicket while rollick and bounce grow into trademarks. The twelve-minute network of cosmic licks atop a meaty buffet of chaos closes out the album on Inkwizytor. The track's keys, organs, whispers, and cryptic etchings squat beneath growing guitar noodles, choking and drowning even more strangely than you'd imagined. I guess you've just gotta hear it.

If they're not dragging you into a misty ditch, o.d.r.a take delight in throwing you ass-first into a moldy trunk. Take up residence there and smother your own screams. This delta-sludge vibe somehow landed on the other side of the pond, and the results are medieval and nut-clutched. The message is delivered regardless of the filter, and angst is quite clearly universal. Call it the bottom-line or a bottom-out, but Karl Denke Blües is a sludge treaty of sorts. o.d.r.a were one of Poland's first sludge acts, and here they deliver a fine audition as the country's finest.