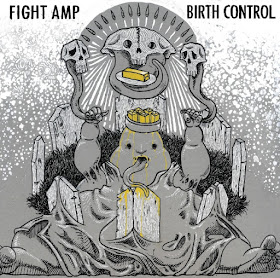 You've gotta make it to the club on time, fellas. St. Vitus opened for someone, right? Pentagram? Yep. Eyehategod, Candlemass, Sunn O)))? Fuckin' right. I caught enough of Fight Amp's set to know I needed to pay attention. Weedeater's Dixie chugged Evan Williams Bourbon onstage, soon after vomited, and I still managed to walk away from the show with a memory of how thick and callous New Jersey's Fight Amp sounded.

Fast forward to September 25th, 2012, when the band releases Birth Control, their third and most jaw-dropping release of their eight-year existence. Simmering with sinuous vigor and unchecked animosity, Fight Amp enter a career-defining era with these eight tracks. Buzzy flutters and a whole lot o' cool are no match for the twisted steel fibers spun through this release, and any fool with a dick can tell you this is Fight Amp's best release to date.

The distant, muffled riffs that open Fly Trap hardly characterize the balance of the album. We're immediately shaken to life with low fuzz and stomping, galloped rhythms. We choke on burning buzz and shiver as things get pretty sticky. Noise rockets go slumming in every direction, slung low and wet as frogs' armpits. The abrupt transfer to White Pickett induces a very loose, very cold canyon of fear and lost identity. Vocals spiral, quick sludge is held to a torrid clip, and bass chugs and hums like a cold January engine. The chamber of chains and rails creepily echoes as a lead-out, and we're on our way to one mindfuck of a Sunday Sludge record, kids.

Creepy Kicks swarms on dense, hollow drums. Sure, guitars swarm as rhythms adjust. But those cymbals fucking clobber. There's a sticky, shit-caked malevolence to the track, but the strong structure is easily lost in the rough edges. This growing, expansive opus could burst at any moment, and its follow-up knows it. Should've Worn Black bounces with riffs laid on flattened soil, eight and a half minutes of unsettling and unrelenting perversion. Cool moods succumb to fear and turmoil, and it's hard to argue when Fight Amp assures "God is dead, so am I." The canopy of filth takes top billing until the sound slows and ominously circles everything. Swampy sludge is strung tenuously through the cool, atmospheric static of closing Nosferatu piano. Sounds like Fight Amp found their stride.

Ah, but that quick punk element is fully exposed on Shallow Grave. Under a cool stream of thickly oozing sludge, the song smears itself from left to right and never feels bad about it. Growing choppy, the song contains some of the disc's most aggressive moments, entering a Coal Chamber-esque hollow guitar buzz. Goner is another story entirely. Buzzing, subdued, and slowed to an industrial urban decay, Fight Amp roll, slur, and progressively set fire to themselves. There's a true sludge toil here, but listeners will love getting stuck in this mire. The rainy day patience is one of the band's assets, and Fight Amp certainly sound like they've had many a rainy day.

But let's discuss the thickest, loosest, most-depraved moments of Birth Control. I Am The Corpse's distant, despondent licks are pure horror growing into an amalgam of grooving heaviness. Pace increases with each refrain as the closer evolves and becomes a low-burning spread of empty death, matched in complacency only by energy and gravity. Riffs form a sidecar to rhythm, rolling through everything in earshot. The brilliance stubs a toe on swampy jams, buzzing through brush and moss. Shake your head.

Holding true to form but spreading seams with growth, Fight Amp know their way around. Birth Control finds the band encrusted and fully-formed, leaving little room for any argument against their claim to sludge-noise dominance. The album's structure is no match for its weight, but that's hardly a collapsible formula. This trio somehow strikes balance, whether they like it or not. Every biting moment buzzes, and every buzzing moment bites.