Today's Atomic Split features two bands unique and disparate in style, but with a common trait of deep, gravelly voiced vocalists. One band is from France and plays excellent stoner/doom music. One band is from Russia with a sound straight out of Alabama or Mississippi. Two different approaches, doubling up on the pleasure of the best rock n' roll in the world. 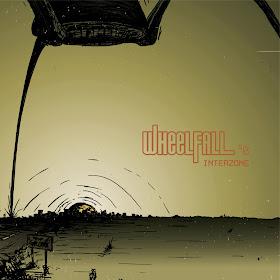 Wheelfall are a very enthusiastic band, excited about playing their version of rock, equally excited about it being an all out assault of stoner/doom tunes, down tuned to the max, underpinned by heavy piledriving bass, and all bracketed up by the snap and thunder of the drums.

The riffs are determined and fuzzy, rendered with passion by Wayne and Cactus Flo, with Wayne topping the layers off with his deep, gravelly vocals that fit expertly into the groove of these doom tunes. Everything is big and bold, a relentless assault of steady jabs and left hooks, punctuated by an occasional uppercut, each landing a jarring blow that renders you senseless and wobbly from the weight and force, but smiling from the pleasure of the brutal encounter.

Wheelfall take inspiration for their lyrics from science fiction and fantasy, from books and movies alike, naming John Carpenter, HG Wells, and David Cronenberg as some of their favorite influences. Every song is deliberate and devastating, including the opening track "Howling" where they waste no time with a beautifully rendered stoner opening that quickly gives way to the crunch and crack of Wayne's rough hewn vocals. The opener is perhaps the highest tempo song on the album, but it leads eventually into a low down delivery of mud slugging fuzz. "Parasite Ravages" is huge and powerful, evoking the slow but inevitable catapult advance of heavy booted warriors of old. The best is saved for last, with the title track "Interzone" delivering the largest and grandest song in the stack, going over 22 minutes of grind and grit, with cast iron filings flying all over the place from the non-stop riffs grinding it out with the roll and boom of big, powerful bass, along with the pounding fury of the relentless drumwork.

This foursome from Nancy, France bring the metal, all fuzzed out and distorted to the max, with helpings of thunder and doom on the side. 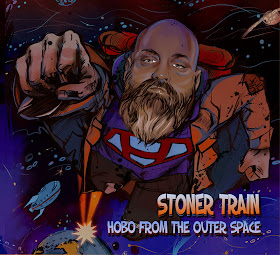 Our next full throttle, full throated album comes from a prolific Russian band, Stoner Train. Hailing from Moscow, they have released 3 separate albums in the course of 2 short years, all of which are more than worthy of the time spent getting to know these fun and singular songs. The newest album is "Hobo From the Outer Space", released in June, which more than makes up for a lack of proper English grammar with a huge dose of international rock n fucking roll that has the unmistakable sound of Southern U.S. rock of the seventies, displaying huge, bluesy guitars, along with heavy doses of banjo and harmonica.

The harmonica is used prolifically throughout "Hobo" as well as on their previous two offerings, "Sluts for the Rebels" and "Rusty Gears", where it is wielded with force and power on many tracks, and while not normally an instrument of choice for music that prides itself on being as heavy and as forged in the high temperature foundries of hard, hot steel, the enthusiastic and crazy members of Stoner Train make the harmonica work, and make it work beautifully. The harmonica slides right in next to the down tuned riffs of Burning Beard's guitar as well as complements the lightning hot blues guitar from Serj.

The opening track, "Cannibal Hobo", is a perfect introduction to this singular collection of music out of the distant, cold capital of Russia. The guitar begins slicing away immediately upon takeoff, and charges straight through to the introduction of the wonderfully guttural, gravelly vocals of Mr. Gdanian. "Land of the Unheard Song" incorporates generous portions of the harmonica, not to mention a deft and incredible vocal rendition from Burning Beard that is worth the price of admission on its own. Both those elements are complementary to the deep and acoustic strumming of the guitar on this track, a feat of unusual accomplishment. Perhaps the best blending of high energy, adept guitar with Stoner Train's unique wielding of harmonica comes on "Dancing on the Grave"

The songs on "Hobo From the Outer Space" are all well written, with beautiful melodies that lend themselves perfectly to the high energy signature of the Stoner Train musicians. With songs that have such titles as "Dogs From The Outer Space", "Coelophysis Stuthiomimus", "Tractor Driver Fred", and "Frozen Booty Jam", there is a dominant theme of huge fun and high energy on their newest release that matches or surpasses their earlier albums, something that is sometimes hard for bands to sustain over the course of several recordings. Stoner Train, though, not only sustain their high energy and superb creativity, they demonstrate on "Hobo" significant growth in their ability to develop their craft, no longer relying upon cover songs of their favorite musical influences, instead developing high quality melodies that incorporate the discipline of good song writing on the collection of tunes on this album.

Music this fun and unique is nothing but pure enjoyment when it comes along once in a blue southern Russian moon.