New Band To Burn One To: BLACK SMOKE DRAGON 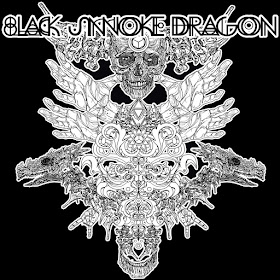 Black Smoke Dragon is an instrumental Spanish band from northwest of this country (Galicia). We started together at 2009, doing some instrumental jams, with Stoner/Sludge/Doom influences. We love bands like Eye Hate God, Sleep, Corrosion of Conformity, Crowbar, Down, Saint Vitus, Mastodon and Black Sabbath, of course. We have quick songs, slow sounds and later we introduce psychedelic arrangements. Bands like Ghost, Church of Misery, Kylesa,...we love this noise and shit man! Of course, we play on another bands too. Álex is the ex-drummer of Oddy Lane (metal/alternative), Lloymi plays guitar on Arsenaut (Rock/Metal) and Drums on ID3M (Metal), Oskar has post-rock projects and plays on ID3M too. And Berto plays on ID3M and Arsenaut too. We are two guitars (Berto, LLoymi), bass (Oskar) and Drums (Álex). For this recording, one friend (Juanin) helped us with keybord arrangements.

"With thunderous drumming, heavy riffing and brilliant song structures you get a feel of where the bands influences lie. This demo from Black Smoke Dragon is a near perfect representation of how a demo should be. After listening to these two songs, I kept hitting repeat because I wanted to hear more. Many times an instrumental band can get caught up with overproducing and get quite boring because of lack of groove and/or musicianship. It is evidentally clear that these dudes know what the fuck is up. Sometimes when I am listening to a band, I think ,man I wish that band didn't have a "vocalist" to ruin the music. Black Smoke Dragon made the right choice. The demo is well-produced and without a doubt a band that deserves your immediate attention. The band also has a 5-song rehearsal EP from last year up on their Bandcamp page. While not as epic and dynamic as the current EP, the rawness and groove of those sessions show you that this band has something special."