New Band To Burn One To: LASER FLAMES ON THE GREAT BIG NEWS 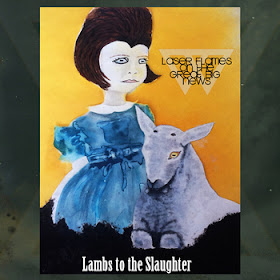 Gang vocals, viola, blast-beats, dive-bombs and galloping guitars galore accented by some of the sweetest vocal harmonies ever to drip down from the south side of the Mason Dixon. “Lambs” the first release by Tennessee’s “Laser Flames on the Great Big News,” features four catchy-as-hell, southern-rock songs bursting at the seams with beauty, power and ache. With all the groove, soul and killer riffs of a Hendrix tune mixed wtih the heaviness of Sabbath, “Lambs” could be the imagined outcome of ‘Masters’ era Metallica playing the stolen backline of Lynyrd Skynyrd til fingers, feet and vocal chords bleed.

“Lambs” genre hops a thousand hyphens and stylistically traverses much of the rock and extreme music universe, but doesn’t get lost in gimmicks or novelty games. This is music that’s real, played for therapy and release by four hard rock soldiers. Sung to hell and back with alternating male and female vocals, "Lambs" is like L'autrichine era Jucifer, Cat Power before she cleaned up and (the) Melvins doing their best T Rex impression.

Featuring John Judkins, current bassist of Rwake, and formerly of Today is the Day and Christine; Laser Flames on the Great Big News is a band that plays rock songs for metal heads, country ballads for crust-punks and classic rock for black metal maniacs. Such fine melody made evil through heartache and the devil’s electric guitar. If Led Zeppelin, Sabbath and Thin Lizzy find time on your turntable next to Slayer, Melvins and Mayhem, Laser Flame on the Great Big News have something you should hear.

"Wow! What is there left to say that the bio hasn't already said. I am going to try and describe what the hell I just listened to. Laser Flames on the Great Big News is not only the most unique band names I've ever heard  but is pretty fitting for the abstract music that the band plays. The band has a huge southern rock influence but throw in some grind and crusty punk and that is where the fun begins. The classic angel vs. devil emerges as the angelic vocals matchup in a battle royale against the muddied guitar licks. This music goes from here to there without missing a beat, and even though the band crosses genres frequently throughout each song, the melody is never sacrificed. This is a gratifying experience for anyone that likes to go outside of their comfort zone when listening to music. You can grab this latest EP for free on their Bandcamp page. Yep, I said FREE!"


Laser Flames on the Great Big news is from Nashville, Tennessee and will be appearing at the "Mutants of the Monster II" festival, in Little Rock, Arkansas during the last weekend of August. The festival features Yakuza, Pallbearer, Rwake, Deadbird and other Handshake Inc bands Biipiigwan, and ((Thorlock)).