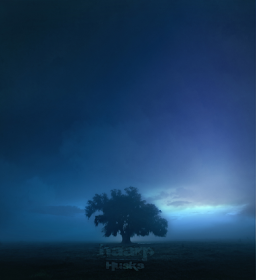 Sludge is inherently messy. Relentless and unapologetic, sludge-o-philes want our sounds low, loose, thick, and absolutely fucking filthy. What we don't always get, however, is a release that's focused, well-realized, brilliantly-produced, and free of the metallic aftertaste that results from the absence of proper channels. It makes sense, I suppose. Fanning out to a broader base can get tricky when the music itself is as characteristically abrasive as some of metal's sub-genres are.

New Orleans-based haarp are spitting a nasty claim to the petulant throne with their first release since 2010's The Filth.  The three-track Husks (Housecore), due September 18th, is a thematic stagger through death-rattled woods, loaded with shifts and transitions that go down easier than barrel-aged bourbon. Heavy with gravity and shit-caked boot heels, the Phil Anselmo-produced Husks is never over-saturated and never grows dull. Nearly thirty-nine ticks from onset to close, each moment on the album is one you'll surely revisit.

Immediately captivating is the track list; titles of deadman/rabbit, bear, and fox summon images of dense forest and placid wind-whispered timber. These images are shredded at the onset of deadman, however, with a violent stutter of riffs atop a bevy of thunderous drums. Vocalist Shaun Emmons barks with confident disdain, a bellow so seasoned and gut-wrenched that you can't imagine how he must sound off-record. The rhythm relaxes and sinks under wispy licks, plodding through echoes of Rwake. Patient, brutal, versatile... the mood is thoroughly troubling. Churn and grind are never out of reach, though, as we complete the life cycle and crawl home to die. Sure, metal can breed a catharsis. But listeners are scrubbed raw on this 18-minute opus.

An immediate onslaught of sludge introduces bear, the album's lumbering, bipolar thorax. Grant Tom's clash of riffs and licks is eye-opening, hinting at melody but ultimately fraught with melancholic realism. At times, bear is driven more by brute strength than speed or cunning, and being stunned with haarp's stiff cudgel is a strangely welcome nightmare of thick disorientation. Twisting and churning, bear furls home on a true sludge trample, more soiled with each labored stroke. I'm often leery of pointing out any absence of faults, but haarp display NONE.

fox's doomy mist is pensive, patient, and quixotic. Husk's slowest, most plodding moments occur here in a fog of questioned existence. You knew this would break, but you didn't anticipate how seamlessly haarp would transition to an agonizingly awesome stomp. Emmons has incredible vocal range, symptomatic of what his eyes have seen. "Weeping women gather under shadows to eek out a false fate," he barks. Seeking answers, only more ("Hollow explanations") questions arise. A hell-bent bounce emerges, strung through Bret Davis' bass plugs. Tempos hold steady, kissed with blistered groove and growing disenchantment. "Save your two-bit dreams," Emmons warns. Sludge barges back, peppered with fading machine-gun drums; Keith Sierra is given marquee-billing as the album enters its unsettling flat-line. Hollow, simple, and emphatic, fox's coup de grâce is Husks' brilliant, prolonged exit.

Planting their feet as sludge metal gods, haarp take their time trimming the fat and let the truth simmer. Between the sludge barrages and atmospheric back roads is tempered, expertly-timed black gold. The band's proficient but patient approach is lined with beautifully rich and vile vision. Husks isn't merely another NOLA sludge-metal record; it's a sonic catapult for a band wholly deserving of every accolade they accrue. Take a walk through these rotting woods and sink with your sorrow. When the animals finally smell your stink, haarp will be waiting. 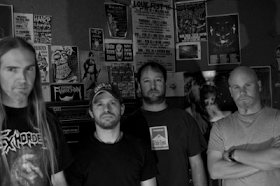 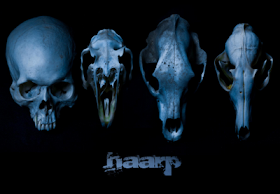