From the dark shadows of vacant buildings and the settled dirty dust of downtown Los Angeles, there is a beacon of light. Behold, a rising star shining in the midst of cracked black tar & tetanus-laden rust, The Blue Star Bar.

This is where Armadillicious Music will be honoring the holiest of holy. It is our homage to the one and only guitar god, Jimi Hendrix, on this anniversary date of his heading to the great beyond. We are proud to bring you a feverish, frenzied, tent revival Rock n’ Roll time; a musical rendition reminiscent of the faithful speaking in tongues, caterwauling snake handlers and sinners lining up in droves for a dose of Rock n’ Roll Salvation. These bands will baptize you into the realm of the sonic spirit. Your soul will be washed clean by the sheer force of the Rock n’ Roll.

We are thrilled to bring you the following:

FIREBALL MINISTRY – The tent thunders with the shouts of the devotees who beg for a release from their mundane existence. The pleas ring out for a break from the ties that bind them to their mortal coil. They have the belief in something greater and that which is greater is known as the mighty Fireball Ministry, who are dyed-in-the-wool, resolute believers of the Rock and the Roll. With a brand new Self titled, Restricted Release album in the holsters, Fireball Ministry are ordained in the Mack truck version of "Swing Low Sweet Chariot". They will drive over you to reach salvation, dragging the empty shell of your body behind as your spirit reaches new heights into the black darkness of the beyond. Your hands will bleed at the palms while you try to hang on to what you know. Your stigmata will not save you; your faith will not save you. The only thing that will save you is the Rock which they are delivering; tearing your flesh from bone to bombard your soul. Beware, they are holy knights bent on delivering you from this wretched life.

SASQUATCH - Wreaking havoc on those who lack faith, Sasquatch lead the way by brandishing their fiery sword of rock n' roll. With their third Smallstone release, unleashed on the unsuspecting masses, no longer do you hear the trumpets of heaven calling; you’re now brought to eternal rest by a trio of destruction. 70's hard rock mixed with a dash of metal carried by an unmistakable undercurrent of psychedelic sounds permeate their songs. You are anointed at the alley entrance of the not-so-pearly gates. Since you are not worthy, the one and only casts you back out because these angels haven’t finished recalling your sins and as they hold you hostage with a super-heavy, bone-crunching onslaught, you are reminded why the meek inherit nothing. Sasquatch will not only knock you on your ass, their collective boot will keep you pinned to the ground while the angry fist of the righteous pummels your face.

HALLOWED ENGINE - Southern fried thick riffs and nonstop energy are brought to the stage with a vengeance. Be prepared to be brought to your knees by the gospel of their guitar-driven, bass-heavy, groove-laden tunes. These are further enhanced by lead singing bass player Laurie Es, whose voice is tailor-made for rock n' roll courtesy of a church choir that could only have been formed by the devil himself. All of these components fit perfectly into the steamrolling sound that is Hallowed Engine as they careen down the path of sin. This is a testimony to the down-home, homegrown feeling which is brought about when you know you’re being so, so bad but it feels oh so good.

SYLVIA JUNCOSA – She preaches the gospel by way of SG as she leads the unsuspecting lambs to slaughter. Her veracity untainted by the years she’s been manipulating six strings; the only truth is the truth of her boundless energy, her brilliant playing, her ferocious attack and the tender love of it all. After a long sabbatical, she’s returned to bring the uninitiated to the altar with the blistering hymns of those who know no other tongue. with a A lofty resume of SST recordings, Sylvia's beneficence is exalted by way of rapturous rock. She not only leads the way, she carves the path. Do not forget, it’s not a guitar in her hands; it’s an instrument of the gods.

TRASH TITAN – Blues was born into the world through suffering. This band stands on the pulpit of that pain and sings right through your soul. The agony of your very existence is spoken for through the musical bounty of blessings you will receive whilst this band recalls those who have come before them. There is no theft here mind you; this band honors those who died for the sake of this sound. They have wiped the beads of sweat from their brow with rags dipped in the holy water mixture of whiskey and gasoline. From the consecrated cocktail of drunken devotion, we rise to behold their glory.

ZINNGESCHREI – The tongue twisting name is German and describes the sound of mechanically manipulated tin. However, the word is a misnomer when it comes to this band. There is nothing tinny about their sound. Ethereal yet with enough crushing gravitational mass to rival a black hole; their deeply hypnotic, angelic resonance rebounds through the vast dark matter of our minds. One listen is never enough. Their musical orbit propelled by the 12 heavenly notes circle the galaxy of one ear to another and the next thing you know, eons have gone by.

This is a Rock n’ Roll Revival of the highest order. We promise to ignite and inflame the passion of the soul of Los Angeles' bonafide down n' dirty rock n' roll. These musical saviors of sonic fortune keep the true spirit alive. Show up and praise all that is ROCK. We will leave you on your knees shaking with the sounds of salvation!

The camp meeting begins at 6:00 PM and a mere $10.00 dollars guarantees you’ll be inscribed in the book of life for the following year. There’s no need to fast either as you’ll find tasty, cheap eats for a mere buck as we move you to heaven. 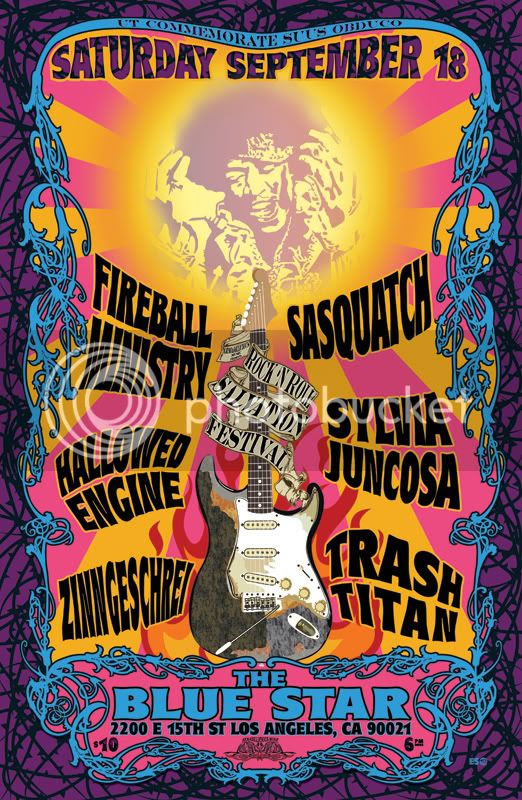