New Band To Burn One To: HUNNO 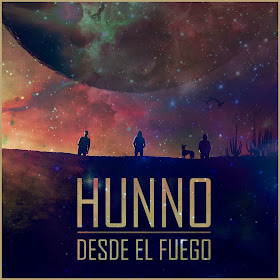 There’s often a debate about whether you can fully enjoy the experience of listening to music when you don’t understand the lyrics, if for instance they’re in a foreign language to you. The argument might carry some legs for lesser bands that don’t trap you into their sound, making you appreciate the vocals as another instrument, but thank God for bands such as HUNNO that manage to unite the world with the simple love of heavy-ass rock music, despite singing in a language alien to this guy’s ears (it would be a crying shame if every band/artist felt the need to sing in an American/English accent, so much identity would be lost, fuck the masses and the colonisation of the world music scene!)

HUNNO are a Spanish three-piece who rock seriously hard. Their debut, self-produced record, Desde el Fuego (meaning ‘From the Fire’) is packed to the rafters with fuzzy stoner grunge grooves that keeps a warm fuzzy glow over your thrashing body as each glacial riff blows your mind, popping brain cells with ease.

There’s not a great deal else that needs to be said here,  it’s all about the music now, just make sure you take a chance on these talented Spanish musicians and allow yourself to become embroiled in the sound of the music, even if you can’t understand the words. Bands like HUNNO will unite this world, one massive riff at a time.
Facebook|Bandcamp
Pete at 1:36:00 PM
Share