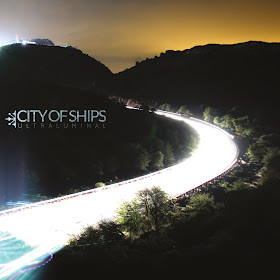 Playing on the post-hardcore tradition with added feeling, expansive sounds and harmonic explorations – City of Ships have always had their own coherent identity. Reaching out to the world with this, their third full length, the band’s unadorned sound is more of the same, arresting, melodic and when heavy it’s a shock to the ears in the best possible way.
Opting for fewer quirky guitar signatures than 2011’s ‘Minor World’ the band strip back on songs like ‘Alarm’ and ‘Metadata Blues’ – while still textured, the songs are slow building affairs that burn with intelligence. Eric Jernigan’s impassioned vocals rasp darkly on tracks like ‘Lost It’ And ‘The Old Man’ which are more reminiscent of the screaming found on 2009’s ‘Look What God Did To Us’ but there are notable exceptions here (‘Illawarra Escarpment’ and ‘Alarm’) where vocals surge and play out similarly to Dustin Kensrue’s in Vheissu era Thrice.

Tagging City of Ships with the arbitrary post-hardcore title is a discredit to the band in some ways who are both heartfelt and dramatic. Rather than be confined by genre parameters the band are akin to Cave In or Thrice with their sprawling-beautiful-ugly sounds and you don’t need to delve any further than 20 seconds into opener ‘The Light You Stole’ to hear the magic within.

Some of ‘Ultraluminal’ is punkier than their last two records ‘Private Party’ where Eric’s screaming has all the acrid taste of vomit – and the full-on aural assault and feedback-laden intensity of ‘Hardwired’ which treads the best of grunge. It’s the perfect blend of emotion and chaos and their strongest offering yet.