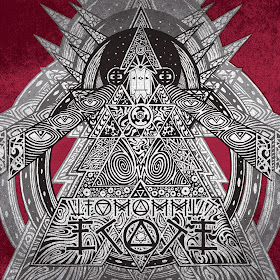 The Italian trio are back with their seventh studio album ‘Ecate’ which takes its name from the Greek Goddess associated with all things darkness – nice. As expected among the noise saturation and dissonant crushing doom, Uffomammut throw out some rib-cage rattling riffs and the occasional dissonant hateful gem ‘Plouton’.

The band have nailed their space-doom formula by now, but refreshingly after the lighter 2012’s ‘Oro: Opus Primum’ which treaded a more prog rock terrain and was heavily laden with distorted chants, ‘Ecate’ is a heavier beast altogether. Expectant wails and feedback are accompanied by Swans-esque bass lines and slow builds giving the album an unsettling tone. ‘Chaosecret’ in particularly sounds like it was dreamed up by Michael Gira ‘Filth’ era. ‘Ecate’ however utilise the heaviness with refrained precision, the album segues effortlessly between the heaviest of doom similar to Neurosis and lighter sequences – which are terrifying in an altogether different way.

This time the band have held back on the space rock special effects opting for a more straight up less flashy album. Brittle and circular Uffomammut are self-descriptive. Seven albums in and the band are nothing if not authentic. The album showcases influences from as far afield as Pink Floyd and Hawkwind on the classic spectrum to more obvious counterparts like Electric Wizard and Om the next.

At this stage it is expected that the band deliver – and once again they have done just that – a crushing masterstroke.