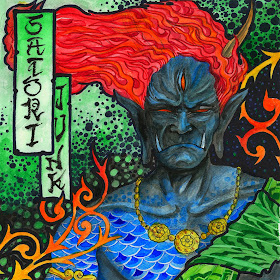 The debut full-length record from Milan, Italy’s, newest purveyors of heavy fuzz-stoner-metal-doom hybrid, Satori Junk, is a record to make you stop in your tracks, and become embroiled in the vibrations. The band says that their idea is to trap the listener in their “rabid and uncomfortable distorted world” and they pull this off with aplomb as one psychedelic doom-laden track after the next tightens its grip around your neck, making each breath more valuable than the last.

With eight tracks spanning an average of nine minutes each, it’s not a record for the faint-hearted. Combining their love of riffs and drawn out doom darkness, Satori Junk is a record which can be suffocating to the point of an asthma attack as opening tracks ‘T.T.D.’ and ‘Spooky Boogie’ wrap riffs and muffled barely-there vocals tight around the thorax, keeping you fixed in their grasp, drawing you into their cacophony of doom. It’s with ‘Spooky Boogie’ that they begin to venture into 60’s psychedelic tendencies layered over their bass-heavy doom riffs, and it makes for an other worldly mix, at times quite mesmerizing, until ‘Monsters’ firmly straps the stomping foot of doom back onto the effects pedal.

The eerie movie samples provide a chilling respite from the layered onslaught of the band’s doom meanderings while offering a glimpse into the distorted world that the band want you to enter, as ‘Shamaniac’ tells a tale of buying a hot dog with the sense of impending horror associated with the unknown entities of 1950s sci-fi films, but it’s not long before the UFO psychedelic doom re-enters the frame with 9 minutes of relentless riffs.

Satori Junk is an exceptional record, full of heavy riffs that entrap you, and making the psychedelic doom genre one to get seriously excited about again.