Wo Fat - "The Conjuring" 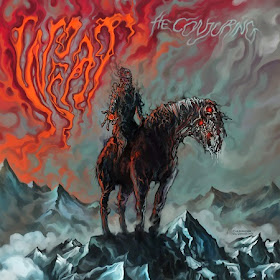 Rejoice all you psychedelonauts, Wo Fat is back with another heaping helping of their trademark brand of malevolent blues rock. On their latest offering, The Conjuring, the boys from Big D take the custom sound they've crafted over the previous four albums and sculpt it into a stoner blooze masterpiece.

The title track opens with a sinister intro that sounds like a cauldron bubbling or perhaps Satan himself cooking up a pot of Texas chili before kicking in with a chugging guitar over a lumbering rhythm recorded at the precise speed at which zombies ambulate. "Forbidden words are spoken and the runes are cast" intones Kent Stump in his gravelly Lemmyesque articulation. With all apologies to his unique off-kilter vocal phrasing, it is Stump's guitar that is the star of "The Conjuring" as it spews forth searing white hot licks. The followup "Read the Omens" is a throbbing fuzz fest highlighted by bassist Tim Wilson's low end rumble.

"Pale Rider From the Ice" begins with a bluesy scat intro before succumbing to a battering piledriver of a riff. Michael Walter bangs out a cranium crushing beat as the searing solo filets your cerebellum. Seriously, if ever there was a song to act as the soundtrack to performing an amateur brain surgery this is it! The undisputed standout of the album though is "Beggars Banquet", a struttin' cock of seventies boogie double baked by the sweltering Texas sun and too many bong hits. Augmented by a hellacious solo and the judicious use of cowbell, the song is a veritable blitzkrieg assault of aural rapage. Closing out the album in epic fashion is the sprawling 17 minute "Dreamwalker. The track smolders its way at a diabolical pace as Luciferian licks insinuate themselves in your brain, eviscerating the last vestiges of your sanity.
Bandcamp
Facebook