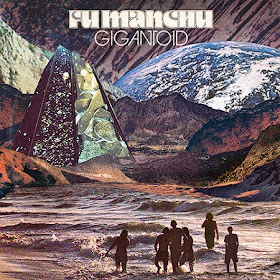 The arrival of a new Fu Manchu album always triggers a Pavlovian response of welcome familiarity in the majority of us above a certain age. Much like AC/DC or Motorhead, you always kinda know what to expect from Fu Manchu but that consistency is a virtue. It's kind of like beer. While it's always cool to experiment with the vast variety of flavor-of-the-month crafts brews that come out on the market, there is ultimately nothing quite so satisfying as sitting in the pub and having that familiar taste of your favorite ale hit your lips. That's Fu Manchu...they are like comfort food for your stoner rock soul.

Consistency in product notwithstanding, there has definitely been an evolution of that trademark Fu Manchu sound over the course of their discography, from the laid back cool of the classic era to the more aggressive punch of their most recent offerings. However, recent tours have seen them revisit some classic lps, such as The Action is Go, and play them in their entirety. This extensive re-exploration of their old material has definitely influenced their latest release, Gigantoid, which finds the band accentuating their modern aggro approach with some of their vintage California vibe, and perhaps some seminal punk as well.

Gigantoid kicks off in ripsnorting fashion with "Dimension Shifter", which starts out as a balls-out snarling affair before the band steps in a time machine midsong and transport themselves back in time to 1997 and settle into a sludgy Sabbatherian groove accentuated by oscillating guitar licks. Next up is the beautifully belligerent "Invaders On My Back" with its staccato riff, start/stop rhythm and wah-drenched solo from Bob Balch. It is "Anxiety Reducer", however, which is clearly the album's transcendent track. Its' fuzzy gargantuan riff is otherwordly, otherweirdly, and as subtle as a drill bit being bored into your skull. Admittedly, I am a Fu Manchu apologist but seriously this riff not only reduces anxiety it obliterates all the synapses of your brain.

Much of Gigantoid finds Scott Hill delving into his punk rock roots as evidenced on the breakneck speed of tracks such as "Mutant", "Triplanetary", and "No Warning", the latter clocking in at under 90 seconds of brutal tuneage. Elsewhere we find"Radio Source Sagittarius", perhaps the most quintessential Fu Manchu song on the record, with its serpentine riff and obligatory cowbell from Scott Reeder. "Evolution Machine" is my personal dark horse of the album. With Hill spouting B-move lyrics over a scratchy riff and syncopated beat, the song just exudes a vibe of coolness that stands in sharp contrast to the blistering solo that combusts in the middle of it. Everything culminates in "The Last Question", a monolithic thumpster with prominent basswork from Brad Davis that devolves into a languid beachy fadeout that serves as San Clemente's answer to "Laguna Sunrise".