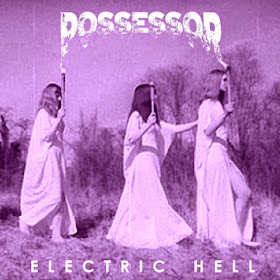 It's funny what you come across, the ways things serendipitously collide to smack your face cold and point you in one direction over another. My day job puts me behind a desk from lying delinquents, some just punked-out teens and others entirely tracked toward the justice system's carousel. As one cherubic drug-dabbler explained why city curfew was broken, she offered a long tale about her friend being hospitalized after trying to flatten himself with an oncoming train. When I asked what her friend had taken that night, she responded "Nothing. He was possessed."

Alright, I had to call bullshit on this. But it stuck with me, half-funny and half-curious. So stumbling upon London's Possessor just two days later first had me rolling my eyes at irony. But this "occult metal" outfit delivers exactly what this blog is all about on the nine-track Electric Hell. It's not a sludge record, it just has those sludge trademarks. It's not doomed-out, smoked-out, or psyched-out, but the fuzz pairs with low-wrought rhythmic groove to clot what has immediately emerged as one of my favorite albums of 2014.

When whispers of occultism weave through a band's themes, the results are often campy and borderline cringe-worthy. Possessor kicked expectations down a ravine and hold enough balance between stripped-down, hollow cruisers and slow timber-turners to keep these songs in heavy rotation this weekend. Blasting through the gate and scurrying with skittish Manson family pacing, Chasms of Malice and Invisible Face hold palpable groove but still riff the fuck out. Frets are fondled and filtered through layers of fuzz and that low bass rumble tickles the insides. Vocals benefit from a veil and bark from darkness, but the throwback elements take the spotlight on this tandem. The long, swirling passages pause only to quickly return and burn up every ounce of daylight.

Perfectly-placed are the towering jambs Limb from Limb and Heavy Dreams. Slowing, thickening, and chugging toward a sticky swamp, the former slings enough viscous shit to pull you off course, while the slow-burning rumble of the latter slugs low and gutteral. THIS is why we're here this morning. These rugburns are simply collateral damage, and we can only gape in awe as the sludge-doom pillars crack and collapse.

Oh, but the closing triptych may be Possessor's best self-sketch, illustrating perfectly what this band aims to do. Bookended with the instrumental Skeletal Form and Electric Hell, dark and nebulous nuances emerge through the unbearably heavy filth. Despite its vocal's absence, Skeletal Form stands as the album's most complete track. Drums earn a medal here, and you can't ignore the possibility of some fucked-up backmasked messages. Face the Possessor is fifth-gear stoner-metal dominated by a more evil, more cryptic vocal than previous tracks. And *gasp*! A guitar solo?! The closing title track is the band's coup, though, steadily summoning disciples and tramping toward a sacrifice. Immediately epic in its brooding feedback, this drawn-out, strung-out death rattle is gorgeously haunting and malevolent. There's steady ascent, but this is truly a calculated administration of sludge-doom demise.

The barely detectable but ever-growing burn at the base of your skull could be any number of things. Possessor understand you can't just light a torch, you've gotta control it. Weaving through Electric Hell is more than a hush of evil, it's nearly saturated. But the craft is never lost and the shifts never let the taste sit on our lips too long. Just as nostalgia peaks, Possessor veer on their own course and take us deep into heavy thickets of varying densities. Don't worry when nobody believes you.