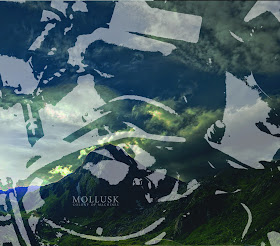 Ever the Johnny-come-lately, eh? It's cliched by now, but it's still embarrassing when something slips through the cracks and only earns your praises after months have passed. When it's the following year, all I can do is hang my head and offer a most pathetic apology. If I comb the desert, mouths go dry. When I scan the swamps, I tend to get stuck. Shit happens, so discovering old new music feels like collateral damage.

I thought I was augmenting my catalog when I ordered a few Crowbar and Cathedral albums last week. Turns out people are far more generous than I could expect, as I split open the mail to find a buyer's bonus in the form of every track Cincinnati's Mollusk ever produced. Three releases in various formats, all sandwiched between Electric Wizard and a pile of stickers. It'll be a while until I complain of being bored.

In under two years, Mollusk have sharpened their meld of ambient, post-metal sludge. Something inside these guys is slowly working its way out. Something unpretty, something massive, something painful. Their 2011 demo offered frantic, jarring retribution peppered with droning interludes. At times, the hum was nearly industrialized, spitting fire and throwing chaotic blades through ambient clouds. Despite being dragged behind a weathered carriage, the movements amid the structures were complex, structurally nebulous progressions. The atmospheres were ominous until the calm was broken in quite primitive ways.

2013's Colony of Machines EP is all these things, yes. The oceanic expanse is more isolated and more meticulously explored, smoothing out the grind and discovering a melody among the melancholy. Shifting Decay staggers with sludgy spite, chomping on uneven terrain to leave listeners nervous via rhythmic uncertainty. The vocal here is distant, not as overtly resistant as previous work. But the vast, lonesome passages shift into torrential hoofed scurries. It'd ring nostaliga, perhaps, but the elements somehow stay parallel with one another and the band's strides are immediately evident.

Hollowed introduces a triptych of celebrated despair, barely breathing at the somber center of nothingness. The cracks deepen, descending slabs find their crashes, and left behind are massive Earth cavities. The interlude-ish title track is pensive and echoed, cavernous but more free than preceding tracks. The trembling plucks craft a balanced reprieve, gently soothsaying without revealing too much. To close on Denisova isn't just massive, it's mature. Things get lower, more dense, and the swirling storm gradually collects adjacent sounds to grow exponentially. The song uses painful reflection to build on itself. The rhythmic shifts never tire, and nine minutes hardly seems like enough time to deliver so much.

Mollusk have steadily introduced more substance, thicker and stickier with more dramatic movements. Drawing things out creates more breathing room, but the numbing buzz is as deafening as ever. Each release is a more exhaustive effort than the last, and the beautiful, destructive amalgam of previous themes is gorgeously unsettling. There's a process here: pick up the pieces, glue them back in place, and cradle the mended whole as it's again thrown from a steep seaside balcony. As each successive track morphs into a larger version of its own being, we wonder if the band will do the same.