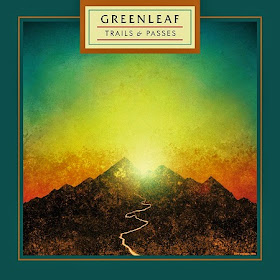 Greenleaf has always occupied a unique niche in the world of Swedish stoner rock. As a side band with a rotating roster (comprised of musicians handpicked from the likes of Dozer, Lowrider, Demon Cleaner, and Truckfighters) they exist essentially as the musical equivalent of a superhero team. Part of the fun is seeing who shows up when guitarist Tommi Holappa yells "Avengers assemble!" and what havoc that particular permutation will wreak. As a consequence to all the lineup rotations, Greenleaf have exhibited a chameleon-like quality to shift from muscle car fuzzouts ("Witchcraft Tonight") to struttin blooze ("Stray Bullit Woman") to haunting epic ("Nest of Vipers").

On their fifth and latest album Trails & Passes Holappa and mainstay bassist Bengt Backe are joined by newcomers Arvid Jonsson on vocals and Sebastian Olsson on drums. The resulting record is decidedly mature on the surface but deceptively subversive at its core, a dichotomy which actually extends to the visual presentation as well. The beautiful front cover artwork could easily be mistaken for one of those discs on display at the Starbucks counter for people to use as a soundtrack for their Sunday afternoon hikes. Take one look at the outdoorsy group shot on the inside however and you see the band looking like a bunch of guys that just got through disposing of a body in the woods.

Trails & Passes kicks off in blistering fashion with leadoff track "Mother Ash", a full-throttle rocker highlighted not only by Holappa's nimble guitarwork but by the mellifluous vocals of the golden-throated Jonsson. The riffage continues to spew forth like molten blasts of magma on "Equators", replete with cowbell and monolithic fuzz, and "Depth of the Sun" which features rhythmwork from Backe and Olsson that joyously harkens back to Jones and Bonham circa Led Zeppelin I. The focus nonetheless remains on Tommi's guitar, as evidenced on "Humans" with its funky strutting riffs and scorching solo.

"With Eyes Wide Open" begins with a scraping intro that segues into a laid-back spacey vibe. With the refrain of "open up your eyes, don't trust their lies" chanted over hypnotic tribal drumming, the track is easily the record's resident smokeout bong star and would easily be the best tune on the album if not for the monumental title track. Over fuzzed-out bass and a hard charging beat, "Trails and Passes" rips along at a driving pace until erupting in a volcanic avalanche of searing licks. By the time it's done, you're volunteering to go back on the trails and passes with them to help dispose of more bodies. 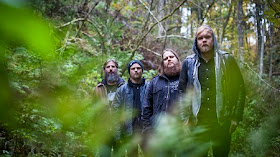 Trails and Passes by Greenleaf