New Band To Burn One To: ¡PENDEJO! 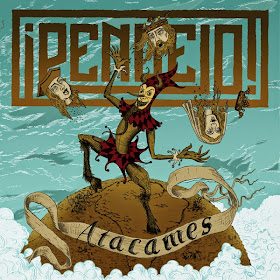 "In 2010, the world was introduced to Holland's latin-infused hard-driving Stoner Rock band Pendejo via their release "Cantos a la Vida". Somehow over the course of the past four years this band has managed to elude the watchful ears of the Heavy Planet staff. With that being said, not only would we like to offer Pendejo as today's "New Band To Burn One To", but would also like to extend our apologies to our Heavy Planet faithful for not featuring this band sooner.

The latest album "Atacames" is a whirlwind of heavy, sincere, in-your face fuzzed-out stoner grooves. Founded by two cousins with a history in Latin America, the band brings a latin-flair to their music by adding vocals grumbled and barked in Spanish and a blaring trumpet that tears right through the devastating riffage.

At the suggestion of Pieter Kloos who has worked with the likes of Barkmarket, Ween and 35007, the band decided to record most of the material live. The album was recorded at The Void Studio in Eindhoven, The Netherlands. The suggestion paid off as the album brings out the band's unbridled energy and passion.

Like an atomic blast to the chest, songs such as the scorching album opener "El Verano del '96" and head-bobber "Amor Y Perenza" leave you lying on the floor gasping for air. The slow warm fuzz of 'Camaron" gives way to a series of shotgun blasts and segues into one fuckin' killer groove not once, but twice, with the second time preceded by a devilish dance of trumpets. By far my favorite track on the album.

Listen to ¡PENDEJO! now. You'll be glad you did. Excelente!

"Dos" is the album's first "single". Check out the skull-bashing rage right here: