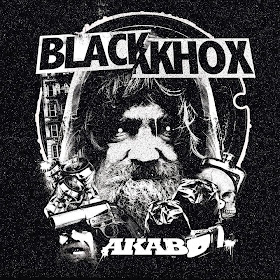 With the opening line of ‘AKAB’ involving a voice over announcing “Respect the cock” (Khok?) you may question as to whether or not Black Khox (again ambiguous?) have their tongues planted firmly in cheeks, especially when on ‘BJ’ they aggressively yell “everyone knows that you suck every cock”. Perhaps it is just simply that they like singing about certain glands, or more likely, they simply don’t give a fuck.

It’s probably fair to think that it’s the later, as the stoner (boner?) sludge ferocity that they lay into is particularly ferocious with its layered pulsating hard (on) guitar riffs striking you with wave after wave of sludgy aggression. With vocals almost indecipherable besides the word ‘cock’, the mammoth instrumentation from the band, hailing from Quebec City, Canada, completely overpowers any need to hear the vocals, so instead that deathly sludge vocal strains become just another instrument in the percussion, more driving force towards their end goal of destruction.

Fast and hard, that’s the way Black Khox do things on their debut, released on D7i records. ‘KONG’ is a standout highlight of this record, with its changes in pace, guitar riffs charging from all directions, and changes in speed tempo to leave beaming sweaty smiles etched on Khox loving fans faces all round. Straight after, the band rip into ‘PARASOL’, and it all just becomes a glorious cacophony of destructive riffs.

Here at Heavy Planet we’ve already suggested that you should burn one to these guys, and not to blow our own trumpets, but by God were we right! But, just remember, as you walk around town displaying the words ‘Black Khox’, remember to not give a fuck!