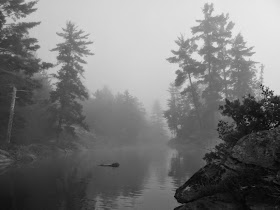 If it's not my ears, it's my head. If it's not my head, it's my mind. You can only abuse yourself so badly for so long before your body shows that wear and tear, those warnings finally manifesting themselves outwardly in the form of rickety knees and a whiskey-deepened shake in your voice. These late night, small-club shows offer an outlet, but they also empty my wallet, peel my reality, and make breakfast really suck.

It took a second listen of today's offering to determine the music, not collateral cochlear damage, was the source of immutable, gently deafening buzz. Hunter-Gatherer is a one-man amalgam of drone, sludge, doom, and experimental blackened post-metal shoegaze from Canada's Northwest Territories. None of those descriptors are entirely accurate, and the lot of them hardly begin to illustrate the sound or the purpose. Just as we destroy ourselves with booze and preservatives, so does the entire human race destroy its own natural canvas in the name of progress.

On Demos and the single-track Great Slave Lake, Hunter-Gatherer crafts an expanse of peaks and valleys, filling all free space with the abusive marriage of natural sounds and dissonant interference. The whole of these five instrumental tracks is earthy and cathartic, utilizing what's naturally occurring to supplement mood and purpose. Wendigo's drone is cavernous and somehow humbling, isolating itself amid beautiful organic sounds, yet allowing the interruptions of sputtering technology coming in slow waves.

Pestera cu Oase slowly encircles and hovers until the hum is fractured into jagged shards, piercing catharsis and opening devastation. The loose, sporadic guitar flings dark ash, and the closing tapestries of dirty ice cracking and crashing is barren and unsettling. The wavering drone of Escarpment fills the northern night with static fears, experimental in its intermission. The warped buzz is unwelcoming, the rugged terrain is hardly accessible, and the closing squelch finally puts to rest your Bristol Hum.

We're put back in touch with the land on Kitigaaryuit, a primitive splice of droning thickness. But the synthetic tin armies sneak in, pluck our comforts, and jab us with elemental fears. A slow-motion drift downward only speeds up as nightmarish swirls give us the bends. The punctures grow fewer and farther between, dusting with foolish gold flakes as the creeping fate finally punches through. Again, we're isolated and alone.

The burial of beauty's natural state can't be strongly enough emphasized here. Using absolutely no words, the message smacking us awake and into a jarred sense of realization is that we'll be our own undoing. These songs are pensive and patient, but ultimately they're hopeful the carbon footprint doesn't trend toward a caved-in mudhole. There's beauty in darkness; there's darkness in beauty. When we can simplify, we can sustain. And speaking of sustain...