Sunday Sludge: Sioux - "The One and The Many" 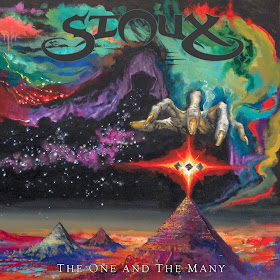 One collateral consequence of featuring new, untapped acts is never hearing from them again. I've got a library of albums from bands who will never see a sophomore effort. But perhaps even more disappointing are those bands who bring a wild rumpus on their debut, only to follow-up glimmers of brilliance with an avalanche of horseshit. Few bands manage to improve, many try to maintain, and most simply should have hung it up to fuckin' begin with.

Not even ten months ago Heavy Planet featured Portland's Sioux, a psyched-out sludge quartet whose self-titled EP is still buzzing somewhere at the base of my skull. March 8th marks the release of The One and The Many, a six-track full-length that separates Sioux from their influences and themselves. Demonstrating both an improved range and an expansion of prowess, this release is more than a step forward. It's a glazed, cosmic bootprint on an already leathered sludge metal landscape.

No time is wasted in administering spoonfuls of sludge-doom porridge on Let In The Night, the somber, dejected opener. Breaking into a chuggy plod is nothing new for Sioux, but the sonic smack of timber as if it were a cloud of pesky gnats is daunting and impressive. The vocal scratches free and echoes through caverns until listeners enjoy a break of apocalyptic calm before the shit storm. Plucks lull your senses on a mislead, and when the stomp returns, it's brought along scorches and splits atop an avalanche of mire. Shrieks lead into a scrape toward violent heaves of stuttered tempos on Faithless, a track that cleans up, shaves, and promises calculated vengeance. Trotting uneven ground, the sound manages to hold its structure through staggers, and blitzing licks ascend to draw your eyes due North.

The midsection's duality is a notable highlight, with Ad Astra's cosmic sludge dragging us across a bed of broken glass and following with torrid crank turns. It's trippy, chippy, and scorches through riffs until hollow plucks provide a reprieve, though the breaths are chilled and lonesome. Imagine a slowed tumble down a steep staircase with a trickle of blood leaving your ear as you greet bottom. And you can't even just lay there for a minute, as the epic warp of the album's title track is star-gazed and mud-kissed. Sioux fail to trip over their own ambition and nail the album's purpose on its planetary head. Here these sluggers cut through senses using instruments as precision tools. Quite simply, the dudes honed their shit.

Ascension offers a return to down-tuned lament, pounding and splicing via tempo shifts and intermittent thrash peppers. Gruff pipes and rusty guitar barbs are gonna leave you scythed. Abrasions can only spread as the track presses into flaming thickets and napalm-coated bass threads. Sticky malevolence points our attention toward Scapegoat, an effective bookend to the album's sullen opening moments.  Swaying, drawing ever-closer, and blanketing with a numbness laced over every note, this flame catches and burns exponentially. The cracks spread and the closing swell of all-encompassing sludge denouement imposes nothing short of rattled awe.

Sioux no longer benefit from tags like "promising" and "inspired." Fortunately, scene-swiping psycho-slag achievement accompanies the lumbered strides. The One and The Many showcases Sioux's pugnacious approach to early praise. The album clubs the senseless and denounces doubters via six stumps of accomplished, assured psychedelic sludge. Sorry Sioux, you fuckers just upped your own ante. Turns out mediocrity just wasn't your thing. But we knew that. Stand stout with greatness, strut a strong chin, and grind it home. Thumbs the fuck up, fellas. This one resonates!