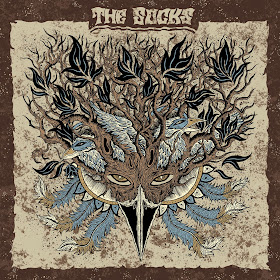 For all the fucks you never gave to Mondays, hand over a few to nostalgia. Nut up from being thrown back after experiencing French fuzz rockers The Socks and help your buddy scrub and shine before his mom gets home. Come March 18th, you'll do it all over again. Stock the broom closet and construct a strong lie so you can give these ticklers a fair shake when their self-titled debut LP hits your hands straight outta Small Stone.

Formed in 2009 and scorching senses ever since, Lyon's bastard sons of overgrowth riff 'n roll as though the contemporary and the wistful were sewn together and they cut themselves from the resulting cloth. Today they've offered Electric War, a frantic discord turned constructed corral, wholly encompassing the foursome's not-so-distant past, blinding present, and imminently fat future. Close your eyes and drop your jaw as you struggle to place the sound, but ever-churning fuzz and crashing rhythms circumvent all preconceptions.

So yeah, this is just a taste. But should you spin The Socks' ancestral EP's Side A and Bedrock, you'd find yourself enmeshed in psychedelic hooks and inescapable groove. You won't know whether to look ahead or behind, so squatting square in a pugilist's pose may be your best chance to stave superficial comparisons. This is a contemporary hard rock band shredding their influences and cementing inspired innovation. Don't blink.