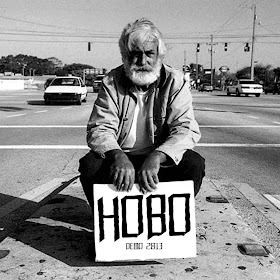 A man once approached me as I left a convenience store. In a British accent, he asked if I smoked. I replied "No, sorry," but he clearly needed more than just cancer sticks. He was carrying a backpack and wearing women's shoes. Behind the mange of his beard and in cockney delivery he explained he was "in from Denver," his van had broken down, his dog had died, and he simply needed money. I gave him a quarter and he almost seemed pissed. That's the breaks, they say.

Seven months later, when the Earth had tilted in our favor, I was pumping gas and heard soft, sooty steps. This asshole. He was at it again, but the accent was gone and he was still "In from Denver." Y'know what, man? Fuck you. Gimme back my bullets.

Maybe California's homeless are different. Santa Barbara's Hobo provide an enticing sniff of the tattered lifestyle, employing riffs and licks atop four sludge rumblers that coat your throat like sweet, sticky syrup. The Southern stomp on the band's Demo 2013 celebrates concrete pillows and more than a fair share of Mad Dog 20/20.

Hardlyfe ducks and slugs with cymbal-heavy immediacy, cracking fuzz twigs and boxing your dirge-laden ears. The swampy viscosity and hollow-corridor assertions balance guitar licks buzzing in adjacent occupancies. When the rhythm breaks, so does the bounding light. Let's cruise before night falls. But where'd we end up? The good-ol'-boy townie bar that is Ammonia sways with a thick and thorny southern groove, spiteful yet deceptively inviting and accessible. Wrapping listners in ribbons of deep-fried Confederate plucks, this track nods, taps its foot, and unfolds amid progressions and re-emerging elemental contributions.

Halfway home and the cloudy eyes are sending us into the ditch. Buzzing sludge spirals upward on PissStank, a chewy, fermented de-evolution toward the 90's grunge bass-rollers of Tad and Paw. The hill-rod singalong is kept loose and limber, jacked with elixir and impossible to pin down. There's a soft patch of underbelly, but these cacklers waste no time in throwing it onto the engine to blacken over a muddy spit 'n hiss.

Mythical Beast boasts a guitar groping that would make most second-cousins jealous. The indulgence is short-lived and revved sludge smacks of ham-fisted reality. Hairs knot, the bumps bounce, and the band never stays in any gear for too long. That's part of the appeal: these guys won't stay still. Unraveling on a torrid bass clip and an avalanche of drum stones, this closer carves its name into pink skin and smiles with swill in hand.

You won't find the stretched-out, bony fingers of post-sludge meandering or the overzealous aggression typically pulsing from sludge-filled speakers. These stumps are quick, hot, and bound to burn. This bum thumbed his way from the bayou and lost his pants out west. Hobo cook up the most palatable of sludge, grooving and stomping without over-thinking things. Dig deep for those nickels and dimes. 'Merica has kept these guys honest.