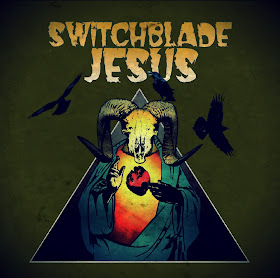 Since our first introduction to Switchblade Jesus back in 2011 as a "New Band To Burn One To" , this Corpus Christi-based band has found a place in our hearts here at Heavy Planet. This five-piece band has been tearing up the local scene since 2010 with their blistering live shows, been featured on a few killer compilations from Doommantia and The Soda Shop and came in a close second in our March Bandness competition with The Soda Shop back in 2011.

The band has gained some favorable reviews including one from our very own Nuclear Dog. Here is what others have had to say about Switchblade Jesus:

---"all I can say is, what Switchblade Jesus has to offer is some cutting-edge, blood-boiling, head-nodding, riff-rocking beast of a stoner rock strain, distilled from pure-bred trailblazing attitude and adrenaline junkie art. As glorifying as that might sound (or I tried to make it sound) I have no doubt in my mind that Switchblade Jesus will impress us with their full-length. Check these guys out. If you’re into rock at all, you won’t be disappointed, and if you’re into stoner rock, this is your thing, and if you like your stoner rock filth-encrusted and larger-than-life, it’s your drug. 10/10, keep it up."-Sarp Esin, Doommantia

---"The songs on the EP are heavy and hard rock with some metal moments. They’re fast paced and in your face, well in your face if it’s still there after the melting that Switchblade Jesus is capable of doing." Bill Goodman, The Soda Shop

We have been waiting patiently for the band's first full-length debut and are honored to present it to you in its entirety. The album will be available in much better sound quality on their Bandcamp page beginning on Friday June 28th.  Now without further adieu, get ready and crank this mutha up!

Heavy Planet thanks you Switchblade Jesus for letting us be a part of your impending success.