Flashback Friday - Comes with the Fall 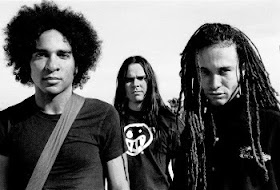 You know, Flashback Friday has become a sort of on again, off again affair for me as a writer here at Heavy Planet.  Every so often, I just get that urge to dig back into my record collection, wipe away the dust, and groove out to the shit that got me here.  Today just happens to be one of those days and it all started with me spinning the latest Alice in Chains album, The Devil Put Dinosaurs Here.  You see, I'm a huge fan of that band, both the past (with Layne Staley) and the present (with William DuVall), and one of the things I really admire about them is how gracefully they dealt with the death of the former while still maintaining their core sound and vision with the latter.  But Alice in Chains isn't who I'm here to talk about today.  Instead I'd like to revisit the band that led Mr. DuVall into the ranks of of that esteemed rock and roll franchise and catapulted the career of another musician (drummer Bevan Davies) into another.  Today I'd like to talk about Comes with the Fall.

To begin, we need to rewind to 1992 in Atlanta, Georgia where it all started with the dissolution of DuVall's art-pop/jazz-rock project No Walls.  Perhaps looking for a simpler outlet for his musical vision, the singer/guitarist joined up with Davies, guitarist Nico Constantine and bassist Jeffrey Blount, to form…of all things…a glam-pop band.  This lineup released two records in the mid-to-late 90's under the moniker Madfly before Blount decided to leave.  Upon finding their new bassist in Adam Stanger, the band abruptly changed their name and more importantly their sound and alas, in 1999, Comes with the Fall was born.

Within a year, the new band had written and recorded their self-titled debut, which was a noticeably heavier, darker effort that combined massive riffs, powerful vocals and virtuosic melodies (give a listen to "The Three Wishes"…hell, give a listen to any of it).  Needless to say, things were most definitely happening and on the brink of album number two, Comes with the Fall decided to relocate to Los Angeles in an effort to further the reach of their music…a decision that would ultimately pay off through their friendship and eventual collaborations with Jerry Cantrell.

But first, the band released their sophomore record The Year is One, which they had recorded as a three-piece after the departure of Constantine in 2001.  The album built on the foundation that the band had established with their debut and received acclaim and praises from most who heard it, to include the aforementioned Jerry Cantrell.  If you listen, it's easy to hear not only the voice, but also the incredible guitar work that would eventually put DuVall front and center with Alice in Chains.  In fact, Cantrell was so impressed with Comes with the Fall at that point, that he subsequently invited them to not only open for him on his 2001/2002 tour in support of his solo record Degradation Trip, but to also pull double duty by performing as his backing band.

A live album (Live 2002) was recorded during the tour and released later that year, but it would be the last output from Comes with the Fall for quite some time.  In 2003, Bevan Davies would be the first member of the band to be "recruited" for lack of a better word, scoring a high profile gig as the drummer in Danzig (he would go on to play on that band's 2004 album Circle of Snakes).  Then, in 2006 DuVall was asked to play a series of benefit shows and eventually a full tour as the fill-in vocalist/guitarist for Alice in Chains.  Throughout all of this success, both he and Davies maintained their status as members of Comes with the Fall however, releasing The Reckoning EP in 2006 and another full length, Beyond the Last Light in 2007.

By 2008, DuVall's status in Alice in Chains was solidified and the following year that band released the excellent Black Gives Way to Blue, with him on vocals.  The always busy Bevan Davies sat in for short stints with Static-X and Bloodsimple, before teaming up with Bloodsimple bassist Kyle Sanders and former Torche guitarist Juan Montoya to form another Heavy Planet favorite, MonstrO (whose debut album was produced by none other than William DuVall).  As for bassist Adam Stanger…he was last heard playing in a band called The Young Royals.

To my knowledge, Comes with the Fall has never officially disbanded, so there's hope that we'll still hear new music from the trio.  With that said, you should certainly seek out any of the albums (as well as the EP) that I've mentioned in this piece, if for no other reason than to sample a band with so much talent that they were literally picked apart by their peers.  Enjoy.