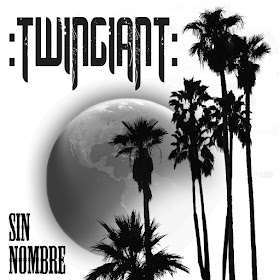 Here we go again. Another Sunday nod to the southwest and another dick-sucking diatribe. Huddled in my Midwest den of splintered wood paneling and light-years away from a scene where anything interesting happens, it's no wonder I fantasize about palm trees, sweet tea & gravy, or the Rocky Mountains. But there's something cosmic and transcendentally jaw-dropping about the sounds lately expelling from Arizona. I won't pretend this is the last you'll hear about it.

Smack in the thick of things is Phoenix's :TWiNGiANT:, a band formidably cementing their capacity as the rotting apple of Heavy Planet's lazy eye. Their 2012 effort, Mass Driver, found itself on countless year-end best-of lists, dropping relentless stoner-sludge clout and countering the mire with space-driven passages fit for a junkie cosmonaut. On Sin Nombre, :TWiNGiANT: refasten the sticky sweetness and bounce between mossy planets with cocksure dynamics and perfectly-timed shifts. Contrasting what's under our feet with what's over our heads is merely kicking at loose stones; this five-track shifter is what Mom really wants.

Rolling out with steady chug and churn, Pelisneros submits to cool stoner-fuzz riffs, spit atop a bouncy wave of bass before funneling into righteous, matted sludge. Jarrod marches in like he owns the fuckin' place while smooth plucks counter the murky collisions. But good luck not getting snagged on Richard Kuklinski's somber reflections. The Iceman's primitive perspective amplifies the track's simmering closing passage, a provocative haze perfectly punctuated by Jeff's bony thumps.

The balance of stone-cruisers and sludge descent is :TWiNGiANT:'s bread and duck-butter, but Fossilized's cool roll, dense with cymbals and mosquitoes, shifts into unconventional structures. Choppy and jarring, this fuzz-puddle heads the transmission with abandon. Warble sews up the very wounds it inflicted, all the while that sludge finds its way under your door and throws the track onto it's back. Not a moment is wasted, and the cadence stuck in your brain is your only companion on this barren-canyon stumble.

La Haine dusts off and immediately throws down, slowly slugging but abruptly peppering fits of spunk and spurt. The rubbernecked sludge welcomes the smooth, thick bass ribbon as everything within an arm's reach is absorbed and eaten by licking flames. Following an awesome jostle is the collapse to catch rusty breaths and tormented assertions. This is the disc's impressive run of the gamut, a panoramic collective of shifted rhythms that impossibly battle and betroth. Cloaked in Black is as spacey and steamy as anything the band's released, blending the promise of escape with the realization of permanence. The bouncing buzz of sludge pauses and looks about, however, before boiling down to bayou blues riffs. Bones soften and tissue separates as the track steadfastly cruises toward a return to a staggering spiral. Goddamn, they did it again!

There's a detectable wave of melancholy strung throughout Sin Nombre, coming to a hilt on Ricky X R.I.P. Wreckage Metal Radio has had :TWiNGiANT:'s mark as much as anyone, so paying homage to Tempe's late Ricky Martinez is Sin Nombre's logical denouement. Evident in both their sound and their approach, it's clear :TWiNGiANT: know where they've come from and where they're going.

What can Heavy Planet say about :TWiNGiANT: that we haven't already? With an expansive and expanding sound that somehow holds true to the band's 2010 inception, all we can really do is hope the band continues plugging and churning out genre-bending releases. Sin Nombre, on one hand, sounds like an album that spans a lifetime and packs it with the highs and lows of human experience. On the other hand, however, we can't help but hope they greet us with another release as soon as possible.