New Band To Burn One To: Buddha Sentenza 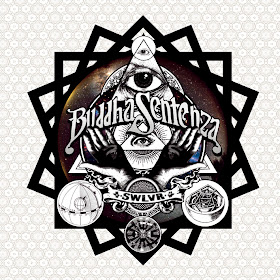 Band Bio:
After a seemingly random sonic collision over the city of Heidelberg in late 2008, the constellation of *Buddha Sentenza* began to form during the darkest hours of that cold and silent winter. Deep under the earth, in the hidden bowels of the Klonlabor tunnel complex, the searing strings and pounding drums condensed rapidly to form a nebulous cloud of loosely jammed, spaced-out, rocking riffs. Rotating freely around some of the most ancient soundscapes - from the astral end of the Pink Floyd to the depths of galaxies such as Black Sabbath - Buddha Sentenza has continued to expand, drawing energy from contemporary constellations as well. Thus, its elements follow the trail of early rock psychonauts and modern riffrockers alike, fusing droning riffs, screaming solos and cosmic harmonies into an instrumental sound experience that defies any strict genre boundaries. The result is a texture that combines the raw massiveness of rock with the infinite possibilities of outer space.

THOUGHTS:
"Heidelberg, Germany’s Buddha Sentenza: “South Western Lower Valley Rock” is a hard hitting rollercoaster of riffs and heavy experimentation. The instrumental quintet sounds like a mesh of Black Sabbath and The Soft Machine’s post-Robert Wyatt albums. Using everything from spoken word samples to vintage synth movements over a sludgy rhythm section, the band explores new ground, some of it feeling like a vividly designed horror movie soundtrack. It’s all well composed and performed to perfection. They have a great vintage sound and a masterful way with dynamics. The ambient portions are mind-blowing and when they go full out 70’s prog (e.g. “Monkey stealing the peaches”, "Tzameti"), they sound like The Mahavishnu Orchestra on steroids. Well done, some ambitiously impressive music happening here."