From out of the mists of recent success comes two albums highly anticipated by the ol' Nuclear Dog, as well as by many fans spanning the stoner globe. The first comes from Orchid, a band that has released 2 highly successful albums in the recent past, with the latest one an LP garnering a first place position on Reg’s Top 20 Albums of 2011. The quality of rock Orchid have delivered to the masses on those past releases naturally generate a tremendous level of anticipation from fans of these dark dreadnoughts. The second album comes from relative newcomers Kadavar who just last year released their debut album and landed on my own Top 20 list, so much did I thoroughly enjoy their blitzing riffage. A common thread that runs through these two bands beyond our sweaty expectations is the type of music they play. Both bands hearken wonderfully back to the heyday of heavy rock n roll with guitarcentric music packaged in magnificent melodies and driven with bombastic passion.
~~~~~~~~~~~~~~~~~~~~~~~~~~~~~~~~~~~~~~~~~~~ 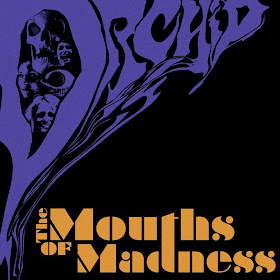 ORCHID - "THE MOUTHS OF MADNESS"

Orchid hail from San Francisco and have been together since 2007, making and playing unbelievably awesome heavy rock in the classic vein of the great bands of the 70s such as Zeppelin and Black Sabbath, perhaps the band they are most identified with. Consciously or unconsciously, Orchid, especially on "The Mouths of Madness", channel original Black Sabbath in almost every way but in vocals, and that's not so far off as to be a detraction. This is not a bad thing. They aren't necessarily mimicking Sabbath so much as taking up the mantle of Sabbath-like music, and doing it perfectly, and by perfectly I mean sounding LIKE Sabbath's music without sounding exactly like Black Sabbath. They sound like Orchid. For me, that's an incredible feat, and a cherished result, because the sound the original Black Sabbath created is priceless and deserves more creative execution. No one else in the history of rock has truly pulled this off, and that includes iterations of Black Sabbath itself after Ozzy left. But that's my take on it. I'd wager that even if you don't agree with it you'll agree that the music on this album is humongous in solid, satisfying low tuned and heavy sound.

Band members of Orchid are:

Huge, heavy, low tuned riffs are the hallmark of Orchid's music, something they have delivered in spades on their initial EP release "Through the Devil's Doorway" and more recently on their first LP release "Capricorn", but on "The Mouths of Madness" they have up the ante by delving a little deeper into the darkness, wrapping uncanny guitar and bass riffs in pitch black wickedness, giving rise to a timbre of shadows and monstrosity. What tops off the toothsome signature sound are vocals at once unique, compelling, and custom made for the music. All in all, this latest album is a black ribbon gift of impeccable conveyance.

Nine songs have been rendered on "The Mouths of Madness", none more full to bursting with manic melody and classic guitar riffs than the title song which opens the album like a long lost companion of unbridled passion.

"Marching Dogs of War" elicits dark nostalgia in a way that penetrates directly to some primal dark core where the tapestry of Baker's guitar and Nickel's bass entwine perfectly with the percolating perfection of Mindell's vocals.

"Silent One" is a psychedelic romp of sheer delight where low tuned guitar licks are meshed with Kennedy's masterful drum fills and Baker's dextrous solos, and where spacey reverberations echo throughout the melodic journey of dark energy.

"Nomad" is a vocal triumph, where Mindell expresses remarkable power and depth in relating a fantastic tale through the purposeful tempo of strings and sticks, moving through a number of vocal variations throughout the course of the song, executing each with a masterful stroke.

"Mountains of Steel" could have been an apt album title for this ennead of superlative symphony, but, as one of nine delivers the same monstrous, gargantuan sound as its brethren.

"Leaving it All Behind" delivers a classic sound that isn't as deep and dark as those before it and after, instead eliciting an incredibly beautiful melody and guitar delivery that is driven home once again by Mindell's spot on vocals.

"Loving Hand of God" is heavy and low, with fibers of guitar clarity strategically intertwined through the dark package of melodic endeavor, consisting of a changing tempo that ranges from deliciously slow and deliberate to an upbeat solo stack of blistering heat.

"Wizard of War" is christmas and birthdays combined with the sabbath, a pure mountain of low tuned sweetness, from the mega deep riffs and tight tempo to the clarity and presence of impeccable vocals, topped off with solo heat that has a frayed and dangerous edge.

"See You on the Other Side" signs off the album in aggressive style, raining guitar solo fire and impassioned vocals onto an energetic melodic odyssey replete with unrelenting pneumatic drumwork.

This album is exceptional in many ways, but strip out all the superlatives and comparisons and measure it solely on its execution and delivery and it stands up as a timeless masterpiece, simple as that. Yes, it will enter the discussion as year's best, and will come up against some stiff competition, perhaps even from its doppelganger band (we can only hope), but make no mistake, it will be there with the very best once the dust settles. I'd even wager it will be there long after, standing beside Orchid's first two releases, and any subsequent work bound to come out down the years, as a compendium of colossal celebration. 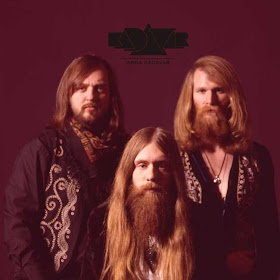 The beauty of this decade, and likely beyond, in terms of awesome heavy rock is the amalgam of the best of 70s metal and 90s grunge along with the underground stoner rock and high desert sounds of the 90s and the 00s. Many kids who grew up listening to their parents' music and their elder siblings' or friends' music were likely exposed to a tremendous amount of great classic metal and underground rock. As those kids have become adults playing in their own rock bands, whether from the U.S., the Netherlands, Sweden, Germany, Argentina, or anywhere on the globe, they are developing masterful strokes of monstrous metal magic. Hailing from Berlin, Germany, Kadavar are the vanguard of that development, leading the way with their colossal creations of mega metal. Two incredible albums in two short years, while not unheard of, is still a major accomplishment for any band, but to follow what was widely considered a resounding successful debut with a sophomore effort so soon is incredible, and risky only if it's not up to the standard already set upon themselves. The question Kadavar have put to us, then, on this sophomore rendition is, 'is "Abra Kadavar" as good or better than our self titled debut?' The conclusion, before going through the evidence, is YES! Somehow, using the momentum gained on that self titled juggernaut, Kadavar have managed to kick their Bavarian beast machine up a whole 'nother level and blast on down the highway of classic/retro heavy rock on an engine firing on all cylinders and purring with volume and perfect synchronicity.

Band Members on Kadavar are:

To start, the overriding brilliance of Kadavar comes across to us in the same manner used by all bands who create meaningful, worthwhile heavy rock, with phenomenal guitar, skilled vocals, and superb melodies. For Kadavar the vocals and guitar happen to be delivered by one member, Lindemann. But, it's imperative to point out that the hard driving, relentless sound of Kadavar's brilliant melodies would be flat and listless without the gifted and impassioned rhythm section of Mammut's Rivoli bass and Tiger's extraordinary drumwork. Listen closely and you will find skillsets far above the bar where excellence begins to be measured. There is an energy and athleticism in their melodious maneuvering, lending power and magnificence to the sound and the song.

Lindemann's vocals are perfectly matched to Kadavar's music, but beyond the quality of his vocal outpourings is the manner in which Kadavar arrange them on the recordings, just a bit behind the instrumentals, keeping strings and sticks at the forefront where they deliver not only the signature sound, but also elicit the unyielding satisfaction of a willing and engaged audience.

"Abra Kadavaar" is resplendent with music, consisting of 10 tracks, each a marvel in its own right. The opening track, "Come Back Life" has a slight haunting quality, nostalgic in feel, and spiritual in delivery with crisp, clean guitar work threaded throughout in doses of refrain and dashes of solo blitzes. "Doomsday Machine" follows, and is arguably one of the top tracks on this collection. The same haunting vocal quality persists, but the guitar renderings pick up in intensity and deliberation, performing a tight spiral of crunchy riffs and blistering solos. "Eye of the Storm" follows with a change in tempo and executional feel, delivering an intriguing melody enhanced by powerful bass strokes and brutal drumwork topped off with what is obviously the signature brilliance of Lindemann's guitar licks. "Black Snake" is a plaintive wail mired in blues laced rock, beautiful, unique, and utterly intriguing. The halfway point comes quickly as "Dust" blasts onto the fore in controlled explosions of perfect timing and leviathan riffs.

The second half of the album starts out ablaze with "Fire", a big, bold amalgam of sound enhanced by Lindemann placing more emphasis on vocals as instrument this time around, in which he exercises a challenging lyrical component with passion and superior proficiency. "Liquid Dream" unloads at first like a ton of bricks before narrowing down to a tight, powerful assault and battery of escalating intensity. This song is unique and simultaneously enjoyable . "Rhythm for Endless Minds" is a fuzz fueled psychedelic trip of epic proportions, riding a musical tapestry of intertwined sounds and existential riffs overlaid by ethereal, haunting vocals. The title song, "Abra Kadavar" continues the colorful and euphonic odyssey but on a brighter, more colorful tapestry using heavier gauge threads of guitar riffs, drum rills, and bass fills, interwoven in complex and intriguing pattern of enchantment. The album closes out with "The Man I Shot" returning to the classic, nostalgic formula that was followed previously on the album, unfolding a sound that is at once fresh and nostalgic, reminiscent of  a long lost rock experience from days gone by and eras past but still reverberating in the blacker recesses of a dark subconsciousness.

This is another album that goes immediately into consideration for 'best of' discussions once the year end is upon us. In a genre in which listeners, followers, fans, and disciples demand exception and excellence, Kadavar have delivered that in triplicate. There is depth and texture to all ten songs, providing the listener with vast opportunities to explore oft and anon the weavings, nuances, and tapestries intertwined throughout the album.

Order a copy of the CD or vinyl at Nuclear Blast