In Case You Missed It: Kingsnake - One Eyed King of the Blind 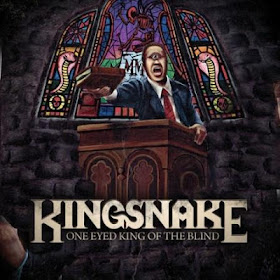 You know, it’s a simple fact that we are all products of our environment and surroundings.  The sights, the sounds, the people and the overall vibe of the place where we live make us who we are…they define us.  Now I’ve spent quite a bit of time in the City of Brotherly Love…hell I even lived there for a stretch…so I can attest to just how ironic that moniker can be for a city that’ll chew you up and spit you out before you’ve even crossed the Schuylkill River.  Fact is Philadelphia is a place that relies on tough love versus brotherly love to instill a sense of pride, a measure of grit and an unflinching resolution in its residents.  So it should come as no surprise that the guys in Kingsnake call Philly home.  Just take one listen to the band’s sophomore record One Eyed King of the Blind, which was released back in March, and you’ll hear that swagger and confidence dripping from every bluesy, boozy, badass note.

Now perhaps I’m reading too much into it, but Kingsnake’s opening statement here seems to be that they’re “all in” with this album.  You see, the first thing you’ll hear is the sound of a coin spinning, rattling and ultimately coming to rest, as if the band has just thrown down their ante in some high stakes, winner-take-all game of chance.  And with that, all bets are off as vocalist/guitarist Bill Jenkins, guitarist Brian Merritt, bassist Matt Kahn and drummer Matt Farnan simultaneously erupt into “Bullets & Kisses,” a song that begins life as a raunchy, boogie rock number, not unlike something you might hear from ZZ Top, and then shifts gears midway through, to become a slower, heavier slab of Sabbath inspired groove.  On subsequent tracks “Too Little Too Late” and “Fang of the Cobra,” they combine bluesy fuzz with raspy vocals, transporting you to some alternate rock universe where Warren Haynes is the front man for Clutch.  By the way, the latter of the two songs is my recommendation for your single track sample.  Dig that trippy organ…this one is killer.

Speaking of bluesy, it doesn’t get much more so than on “Mountain Girl,” where Jenkins sings a sort of stoner Kumbayah in his gravelly voice while Kahn plucks out a steady bass line alongside Farnan’s beats.  Then, on the heels of a hoarse and throaty “just like that” from the vocalist, Merritt adds his guitar to the mix and the song settles into a sweet, 12-bar groove.  But the true showcase of the band’s dual guitar attack, not to mention more of that tasty organ, is sitting right at the album’s heart, with the well placed instrumental “Whispering Eye.”  And then Kingsnake finally kick up their heels and have a little fun on the folksy, acoustic ditty “Know the Way Down,” that is until the song takes on a more sinister tone during the electrified outro.

The final third of the album ramps back up with “Mala Suerte” (Spanish for bad luck), which is a woe is me anthem that’ll have boots stomping and heads bobbing to its Southern fried, stoner rock hooks.  And that theme is continued on the album’s final two tracks “Mercy” and “Calling All,” at least in the musical sense.  The former rides the rails of a catchy, Maiden-esque riff into a bona fide blooze-fest; chock full of solos, sing-alongs and lyrics about chicks…“she’s a black haired, whisky momma…two-legged demoness with a crooked smile.”  While the latter closes out the album with one last bit of boogie-down braggadocio soaked in the spirit of true, outlaw rock n’ roll.  I’m certain that somewhere Ronnie Van Zant and Bon Scott are having cocktails and listening to Kingsnake.

Look, you know I wouldn’t bullshit you.  In fact, have I ever steered you wrong?  Um…if that’s a yes, then don’t answer.  The bottom line is this.  In my quest to make sure you’re caught up on all things heavy, I think that One Eyed King of the Blind is an album that you need to know about.  So regardless of who you are, where you’re from or how that place has defined you, do yourself a favor and show Kingsnake a little brotherly love, will ya?

Free Music Player for Myspace at ReverbNation.com
Toby at 4:20:00 AM
Share