Nuclear Dog's Atomic Split: Devil to Pay - "Fate is Your Muse" / Supercabra - "Down From the Mountain"

We've all had the mental image of a steamer trunk or some other suitcase type carrier, after closing, coming apart at the seams due to the overabundance of items stuffed inside, right? That image is what comes immediately to mind when confronting today's double stuffed Atomic Split, filled to bursting with big, heavy, wondrous tunes from two bands who quite successfully epitomize stoner rock music in the form of Devil to Pay and Supercabra. While each has their own unique take on crafting gargantuan, fuzzy grooves, the similarity between them is in the effort and ability they each possess in forging LPs laden with quality and fun. Both albums are enhanced greatly with volume and repetition, so please sit back, plug in, give the volume dial a quick and complete right turn, and take in the music of these two albums to their max more than once or twice and I'm certain you will be exceptionally pleased with the time spent discovering what these two unbelievable bands have on tap for you to experience with sonic wonder.
~~~~~~~~~~~~~~~~~~~~~~~~~~~~~~~~~~~~~~~~~~ 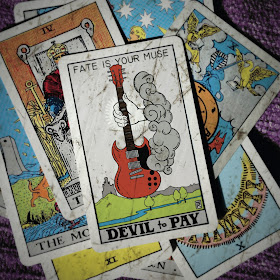 DEVIL TO PAY - "FATE IS YOUR MUSE"

Man, I swear if you listen to "Fate is Your Muse" three times a week, followed immediately by protein/carb drinks after each session, and follow this routine for 6 months, you will look like Mr. Olympia at the end of the cycle, because THIS ALBUM IS HEAVY!. The more I hear it the more I realize just how low and heavy Devil to Pay has made it. It's not just one big lump of metal, but provides finely textured and braided variations on any given song's low tuned riffs and themes. Matt's bass and the guitars of Steve and Rob work together to craft pleasurable mega riffs and snippets of sheer joy on top of interludes of blissful licks, punctuated with welded beads of sheer laserbeam solos. These sounds are wrapped tightly by Chad's energetic, intelligent drumwork that itself is tightly wound and perfectly spaced to create a strong cable of metal might. All of it is deftly and tightly packaged with Steve's unique signature vocals perfectly suited to the melodies they have conjured forth.

Of note is that "Fate is Your Muse" is produced by Ripple Music, who have established themselves as one of the major labels promoting truly great rock and roll, whether it be of the stoner, doom, sludge, psychedelic, or retro variety.

Devil to Pay's history is of the vein of perseverance and tenacity, having lasted through the inevitable band member changes through a decade of existence, but also through major personal tragedies that would stop anyone else cold in their tracks not truly committed to the cause. Hailing from the Heartland of Indianapolis, Devil to Pay have persevered and are creating some of rock's finest music at present - any genre, any level, any anything.

"Fate is Your Muse" contains twelve delicious stoner gems, each weighing tons in combined stonerage, each perfectly relevant on its own, and each adding magnificently to a perfect dozen devoid of sugar and light, but packed tightly with metal grindings, darkness, and distorted reverberations of sheer pleasure.

I can't single out any one song or group of songs as my favorites because they all are awesome, as I'm sure you, too, will find them to be incredibly fun to listen to. Devil to Pay kicks off the album with "Prepare to Die" where a classic riff sound permeates throughout and the heavy, low fuzz is ever present, just as it is throughout the album. Here we are also introduced to the signature vocal stylings of Steve's unique pipes, something that doesn't at first scream 'belissimo', but give it a minute, or a couple of songs, and it will quickly fall into place as perfectly matched to the melodies, as previously mentioned. Subsequent playings then become much more enjoyable experiences.

"Ten Lizardmen and One Pocketknife", in addition to providing the best title on the LP, provides a tightly wound tempo of blistering rawhide rampage. Incredible fun. "Wearing You Down" and "Already Dead" slow the tempo down slightly, but the monstrous low riffs are nearly overwhelming, complemented perfectly by searing, soaring solos.

"Yes Master" has a slight Alice in Chains feel to it, but still strongly remains signature Devil to Pay, make no mistake. All the big guitar hallmarks wrapped by Steve's signature vocals are there.

The quickest, tightest song on the album is "This Train Won't Stop" and it gets my vote for best on the album.  A fast paced romp, tight and clean in tempo, fierce and fun in delivery. "Savonarola" keeps the tempo quick and somehow manages to fuzz up the riffage in doing so.

"Mass Psychosis" is another great example of artistic maturity in terms of musical creation as the riffs and licks unfold, intertwine, and engage the listener in complex constructs of distortion and metal bliss. "Tie One On", it's own unique construct, follows the same concepts as its predecessors with engaging and engrossing fuzz bomb variations and execution. The riffs are mighty, the vocals sprightly, and the song packaged tightly, creating supreme enjoyment in its low tuned magnificence.

The album closes with "Beyond the Ether". This one has traces of original Black Sabbath in it, at once sublime and endurable, etching deep channels of distortion and fuzz into the psyche of the listener. Deep, low, slow, tenuously restrained ethereal power escapes in measured doses as the song trips inexorably forward through the psychotic dark. A majestic ending to a memorable and magnificent dozen of stoner metal treasure.

There is no doubt this album can quickly be placed into a category for consideration of inclusion in Top 20 of 2013 lists. It stands out quickly and only rises in stature with each revelational revolution. 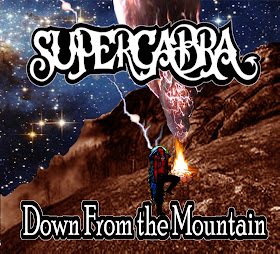 SUPERCABRA - "DOWN FROM THE MOUNTAIN"

Hailing from Albuquerque, New Mexico and forming off the remnants of several local bands Supercabra have brought together an army of guitars ready to do Stoner and Retro Rock battle at the drop of an octave. Strap 'em on and buckle 'em in, 'cause you're in for an unforgettable ride through earth shattering sounds and mind blowing metal.

Supercabra have carved out a unique place for themselves in the underground world of stoner/retro/desert rock by providing a high level of quality, enhanced greatly by the army of guitars at their disposal, but also by the melody making gifts on display presumably by several, if not all, of the band members. The songs are diverse in nature in terms of the musical approach to the melodies, but they claim the same sublime splintery edge to each song.

One sound outside of music that comes close to the resplendent signatures of guitar fuzz and distortion is that of a finely tuned 'big block' engine unleashed on the road, roaring in all its glory as it moves through space in minimal time. Supercabra open their album with such a sound, which struck me as entirely apropos given the meaty, beefy tones shared between music and machine, especially this music by this metal machine. "Vanishing Point" has more of a spoken lyric than is typical for vocal execution, but the guitars are all unleashed on this song providing entry points in myriad locations for focus on enjoyable licks blasting and blistering their way in perfect unison while simultaneously following their own unique pathways. The blend is wondrous, just as each part is mesmerizing.

"Death B4 Minivan", a famous rallying cry for those yet to experience parenthood. Raucous and hormonal, the song generates loads of fun in its guitar onslaught. "Early Morning Red Dog Prayer" is more cautious in nature at the outset, but provides a gargantuan container of fuzz, perhaps in an attempt to mimic the thick rope of cobwebs described within the lyrics from a 'morning after' episode. The hair of the dog kicks in at solo time as the house must surely have caught fire from the screeching, scorching riff rendition. Dexterity and desire are on display during the meat of this lick stew melody, but the closing seconds is what really sets it apart as a singular tune as a ghostly, warbly vocal from somewhere out of the ether takes over and brings the song to a close. Whether it's a guest vocal, or whether someone in the band provides the eerie chants, it provides a memorable closing moment to a memorable melancholy melody.

"Drinking and Driving Man" is a distorted, raucous reincarnation of Commander Cody and the Lost Planet Airmen, fun, upbeat, and bursting with juicy goodness.

Next up is quite likely a song that will be adopted as personal themes for millions of pain sufferers in California, Colorado, and Washington. "Resin" is a haunting and melancholy trip through the trials and tribulations of dealing with resin buildup in various medicine delivery accoutrement. Oh the heartache!

The tempo kicks up in "The Warzone", a tight and structured romp of sonic dissonance levied via the mercenary axes of distortion and power employed by Supercabra's guitar cadre.

There is a plaintiff wail within "Las Vegas Ave." that cuts to the quick with it's sharpness in the midst of melancholic fuzz reminiscing and introversion.

Retro rock is the game on "Stolen Freedom", a song that sounds as if it came from the protest eras of the sixties, only with massive fuzz riffs, lively bass licks, and incredible drum rolls accompanying the crys for freedom.

"Grizzled Stoner Wizard" wins the award for best title, and quickly makes a case for best song to boot. Stoner riffs are displayed from the outset, upfront and vibrant, long and lustful. It's funky and fresh in tone, tripping through the wires, providing an incredible sound of unleashed fury and unremitting joy.

Supercabra close out with a cover of Black Sabbath's "Electric Funeral", superbly unfolding the fantastic tale in measured paces through the refrains while cutting loose during the blitzkrieg choruses of the classic metal standard that is highly regarded as one of the roots of stoner/doom rock, hence the tribute from this gifted and brilliant group of mighty stoner wizards.

"Down From the Mountain" is a superb stoner rock / heavy metal album, never settling for sub par execution on any of the included songs, delivering ten perfectly manufactured packages of fuzz tone.