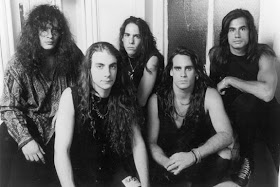 Alright, here’s the scenario.  I was sitting around having one of those music geek conversations with my buddies here in the virtual offices of Heavy Planet.  You know those hypothetical, scenario type discussions where you fantasize about which bands, past or present, that you’d put on the bill of your very own music festival?  C’mon, don’t act like you’ve never done this.  I mean who hasn’t dreamed of watching the original lineup of Kyuss open for the original lineup of Sabbath while the sounds of Fu Manchu waft over the hill from the second stage just a few hundred feet away?

But back to the topic at hand…hypothetical, imaginary concert lineups…got it?  Good.  So it was during said conversation that I got the inspiration for this edition of Flashback Friday.  You see, when our Heavy Planet head honcho included Mindfunk in the lineup for his…Reg-a-palooza, I had myself one hell of a bout of nostalgia.  This was a band that had blown my mind some twenty years ago when my then teenage self would stay up all hours of the night watching Headbanger’s Ball (Jesus I’m old) and rocking out to videos like the one for their song “Big House Burning,” which was in heavy rotation at that time.  Straddling the line between quirky, off-beat funk and distortion laced metal…think Faith No More meets Soundgarden…Mindfunk were one of the first bands to scratch the surface of the mainstream, while managing to jettison the silliness of 80’s pop metal in favor of a more sinister, more real message, vibe and perhaps most importantly sound.

A sort of musical mutt, for lack of a better term, the band featured members from a number of other semi-well known acts.  Vocalist Patrick Dubar had previously performed in the straight edge, hardcore band Uniform Choice.  Guitarist Louis Svitek (who would eventually join Ministry) had played together with bassist John Monte in the seminal NYC thrash band M.O.D., and both Monte and guitarist Jason Coppola spent time in another 80’s thrash band, Chemical Waste.  And perhaps most notable for Heavy Planet readers, drummer Reed St. Mark was known for his stint in pioneering black/doom metal band Celtic Frost.  To say that this was an eclectic bunch of musicians would be quite the understatement, and the batch of songs that would end up on their first album serves as confirmation of that sonic diversity.

Beginning life under the moniker Mind Fuck, the band was quickly scooped up by major label Sony/Epic and then just as quickly forced to change their “offensive” name prior to the 1991 release of their self-titled debut…ergo Mind Funk.  Listening to the album now, it’s interesting to hear the last vestige of 80’s extravagance (take a listen to the pseudo-ballad “Sister Blue”) give way to the gloomy heaviness that defined the 90’s grunge era (listen to “Woke up this Morning”).  Just check out a song like “Bring It On” or “Blood Runs Red” where the band combines the funky fun of early Red Hot Chili Peppers with gargantuan riffs and equally weighty lyrical content.  Mind Funk’s debut album, while perhaps a bit dated in 2013, is an aural time capsule of the transitional musical period from which it spawned and for that reason alone is worthy of your attention.

Unfortunately, it failed to move an acceptable number of units in the eyes of the band’s label and on the eve of the release of their follow-up album, the newly named Mindfunk (one word versus two) were unceremoniously dropped.  By this point in time, a slight name change wasn’t the only alteration to the band as guitarist Jason Coppola and drummer Reed St. Mark were replaced by Jason Everman (of Nirvana and Soundgarden fame) and Shawn Johnson respectively.  Unfaltering, the new lineup proceeded to land on their feet by inking a deal with Megaforce Records, who subsequently released the band’s 1993 sophomore effort, which was aptly titled Dropped.  The album, which was produced by the legendary Terry Date (Soundgarden, Pantera), showed the band evolving beyond the funk influences heard on their debut and gravitating more towards the distortion laden grooves and sludgy riffs of grunge.  You’d do well to give a listen to this one, especially tracks like “Goddess,” “Mama, Moses and Me” and “11 Ton Butterfly,” as it definitively fits the mold of what Heavy Planet is all about.

Prior to recording the follow-up however, both John Monte and Jason Everman would leave the band, the latter rumored to have joined the Army Special Forces of all things.  After filling the void at bass with Frank Ciampi, the band soldiered on as a four-piece and eventually headed back into the studio to record what would be their third and final album.  People Who Fell from the Sky was released in 1995 by the Music for Nations label, however it wasn’t made available in the US and is, as a result, a difficult album to get your hands on (for those of us here in the States at least).  While somewhat disjointed and less cohesive than its predecessor, undoubtedly due to the significant turnover in personnel, the album retained much of the heavy groove that Mindfunk had zeroed in on with Dropped and its worth checking out if you like what you hear on the other two.

Look, I’d be remiss if I didn’t remind you that the point of these features is to introduce you, the Heavy Planet reader, to bands from the past that paved the way to what we’re listening to today.  Mindfunk were undoubtedly just such a band.  Their combination of hardcore sensibilities, funky rhythms and grinding guitars helped to thrust heavy music away from the hairspray and fluff of the 80’s and into the grit and grime of the 90’s.  So that's your history lesson for today...now get on that homework and go get your mind fucked...err...funked.