Sunday Sludge: Otzepenevshiye/Vir' - "For A Knife" 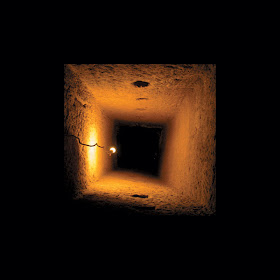 Countless conversations end with the promise of getting together, collaborating, creating. Too often these promises never reach delivery and the conversation drifts to the back of the mind alongside trivia and repressed memories. So many bands play on so many bills, it's easy to see how these discussions unfold and ultimately lose their steam. When two bands finally make the time to tolerate one another, the results can be one-sided, watered-down, or entirely disappointing.

Moving beyond the tradition of splits and guest appearances, Saint Petersburg's Otzepenevshiye and Vir' shared the stage in Kazan' and drafted a plan to together craft an entire album. The end result is one that smashes pigeonholes and shreds labels, a clinic of sound manipulation and redistribution. At times a shoegazing drone-metal stack of layered guitars, others a crushing amalgam of sludge despair, the seven-track For a Knife rolls downhill and flattens expectations in a slow-motion daydream.

Opening on 1000 Doors, a cold pocket of immobilized breaths grows into a churning drone. But when the sounds emerge from every corner, filtering through a corridor of tin and wood, the guitar splinters advise against prematurely formulating opinions. Sergey Milushkin (Vir') claws at your feet as you pass, countering the awesomely ambient structures. Unfolding into a static whir of broken mist, the track breaks and blends crust with unsteady, glazed warbles. If the bands' intentions were to pull apart your senses, they've already succeeded admirably.

The storm of choppy sludge rhythms on The Black is the disc's mock of your discomfort. Guitar sustain remains, wraps you in moss, and searches the premises with one eye closed. The dicey balances the droney when banshees circle and cackle. The re-emergence of the tortured/torturous vocal after a three-track hiatus is welcome and jarring. The track invites you to join, basking in the discontent of a death rattle until the abrupt closing.

Long, sustained instrumental passages alone won't pique the interest of seasoned drone- or post-metal connoisseurs, and failure to let a tone fully respire will prove costly. Four of For A Knife's tracks present no vocals whatsoever, relying heavily on steady pacing and slow decay. Kotlovan's industrial churn offers a veil of productivity, masking the insidious drone elements. Sonne de Toten stutters and stumbles on technological breakdowns, panning samples with awesome atmospheres. Slicing guitar tapestries evolve via expanding fuzz, growing thicker as your shirt snags on hidden thorns. And when the field of rotting futures demands a glimpse of strange beauty shuffling through this ugliness, we transition into -273°C. The bird's eye perspective provides both relent and clarity, but the haunting soundscape is as post-impressionist as it is post-metal. The whole of the triptych is just one of the album's aching highlights.

Pull the pin on Ce Qui ne Trompe pas and what unfolds is an avalanche of screams and raining ashes. The dual-note piano drone is endless and somber, and it's the perfect lead-in to the closing title track. For A Knife is more primitive than what's led to it, but there are glimmers of life and rebirth contained herein. Sludge and drone again poke through the cleansing as if to say "don't forget us," but the trickle juxtaposes tracks one through six. Rhythmic plod burns, guitar embers crackle, and the ultimate pain of Milushkin's bark, absent far too long, are all washed away in the final gasp of one incredible album.

That two bands can accommodate one another, let alone so well complement one another, is an exercise in mastery. Forget that divergent methods and habits actually sound this amazing together and view the album on its own merits. This was simply a group of musicians sharing and focusing and brilliantly realizing ideas in the form of seven long, beautiful cruisers. Greater than the sum of its parts? Who cares. Call it what you want, but this sound is undeniably captivating.