New Band To Burn One To: ATOMIC VULTURE 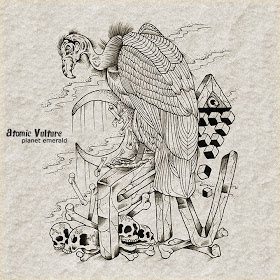 Atomic Vulture is an instrumental stoner rock outfit from Bruges, Belgium.
Originally a four-piece stoner rock formation, they chose not to replace their singer, when he left the band in September 2011.

In June 2012, the trio recorded their first demo EP. Released late July 2012, the EP was embraced by the stoner audience and the band's fan base grew rapidly.
Brace yourself for some uncompromised desert grooves in the tradition of 7Zuma7,Gomer Pyle & the almighty Kyuss.

At the end of 2012, the band made deals with Humid Records (US) for digital music distribution and with DDrop Recordings (Greece) for CD production and distribution.
At the same time, the trio went back to the studio and recorded their second EP, "Planet Emerald", which was released on Jan 10 2013.

"Some of you may be familiar with the Atomic Vulture's first EP released back in July 2012, if not, let us introduce you to the band by way of their latest EP "Planet Emerald". Atomic Vulture is a three-piece instrumental stoner rock band from Brujes, Belgium. Starting of with a low and soft warm tone, the band eventually cresendos into a dropped-heavy groove on the opener "Space Rat". Thrust into space on the tail of a comet and arriving on Planet Emerald you are greeted by a ominous doom riff that slaps you right in the face. The "Missing Link" is a tune filled with swirling grooves, psychedelic solos, and furious drum fills. EP closer "Emerald" is a blast to the past and clearly my favorite song on the EP. The song has a very retro feel and is filled with levitating riffs hovering around a wallowing bass line. Unfortunately it had to come to an end. I look forward to hearing more from these three desert doom merchants. In the meantime, check out the band's two EPs on their Bandcamp page."

Athens-based upstart label D-Drop Recordings will have both "Planet Emerald" and "Demo 2012" out on CD in March 2013. The demo CD will contain two songs not on the Bandcamp digital download version of the release. Check out these songs "Outer Universe" and "King Size Slim"on the D-Drop You Tube channel.