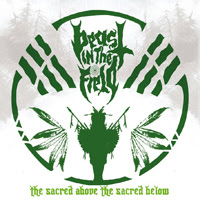 I was born a Hoosier but expect to die a Michigander. And I'm plenty happy in my new home, in a state whose musical pedigree includes rawkhounds like Grand Funk Railroad, The Stooges, and the MC5. And you can throw the Motor City Mad Man in there too, and Motown and John Lee Hooker moved up here as well, so...

I'm sure you're saying this to yourself right now, and I know I've left some out, but this just goes to prove my point. Great bands are born in the third coast, and you can add Beast in the Field to that illustrious list. Headquartered in Midland, Beast in the Field are Michigan's most amazing active rock and roll duo. Duo. Guitar and drums. That's it. There isn't even room for vocals in the wall of doom produced by Beast in the Field. They sounds like spawn of Karma to Burn and Electric Wizard turned up to eleven and played through an Iron Age amplifier. They'd be bigger if they weren't banned from many of the clubs they play after their shows draw noise complaints for miles.

Their new album, The Sacred Above, The Sacred Below, comes out this March on Saw Her Ghost Records, and it is another stoner/doom classic. The album starts out with Great Watcher in the Sky a short guitar piece the style of which pops up throughout the album like a graveyard ghost. After this short intro, the fun starts, with Hollow Horn, a track that gorges your eardrums in the most pleasant way possible for seven plus minutes. Next up is Altar of Red Earth, which begins with Native American style percussion before the riff climbs through the percussive haze and stomps around your cranium for another seven plus. Wakan Tanka comes next, offering another heavy as Earth riff fest that clocks in just under five and a half, the shortest of the songs but very rewarding. After that is the "single", There Once Were Mountains of Ice, which you can taste for yourself by using the link at the bottom of this page. After this cut comes The Great Spirit of Light, a short light piece that sets up the Oncoming Avalanche, a twenty-two minute plus cornucopia of riffs and drums. Then you get the title track, a cut that boasts one of the most memorable riffs on the album and backed by the brilliant Native drumming that pops up throughout the album. And is that a solo in there? Interesting. The album ends with its most ambitious track, Covered by Clouds, Eaten By Snakes, where the ghostly guitar sound of the short interludes steps out of the darkness and dances to the greatest use of sleigh bells I've heard in a rock and roll song. This is their Amazing Grace. The song might stand out on the album, and those who have yet to be baptized by Beast in the Field's mighty riff, might be thrown by the "lightness of the track" but Beast have always used light to their advantage, and you gotta remember that one cannot live on heavy alone.

The video is a track pulled from a previous album, Goat Isle Senace, but the uninitiated will understand from this track what the mighty Beast is all about. Pre-order the album now from Saw Her Ghost.

Facebook/There Once Were Mountains of Ice Stream