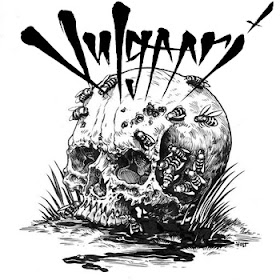 If I had a dirty nickel for every unique and distinct sludge riff I've had slung my way, many would still call me broke. I love metal's grimiest sub-genre, as much as I hate to label and over-categorize its card-carriers. But let's cut the shit: it's hard to break from the pack and truly accrue some accolades. Then again, I can't tell the difference between The Lumineers, Mumford and Sons, or any of the other horseshit bands sucking the life from American thirty-somethings. So when I'm met with dickheads asserting sludge bands "all sound the same," I can't blame them. Sometimes they're right, even if they got there using an ignorant blanket statement.

Anyone ever been to Minneapolis, Minnesota? I thought Illinois was cold, but at 19 I learned Minnesota's gray skies and frigid stiffness cut a little deeper. But The Gopher State has recently offered up some acts that I'll have trouble forgetting. Add sludgers Vulgaari to a promising litany of snowshoe stompers that find time to spew some awesomely heavy tunes when they're not scraping their windows or pissing their name into piles of sooty snow.

A studio two-piece that expands to a live quintet, Vulgaari began with no intention of composing an actual release for mass consumption. You might say the well's been poisoned, as the band's self-titled debut is nine crushing tracks of sludgy doom rhythms wrapped in proficient axe-manship. When the monstrous riffage isn't plowing through your living room, the cosmic shots licking the sky's underbelly will leave dogs running in circles. There's enough murk here to stick to your boots, but what sets apart Vulgaari is the melodies crafted around the low tempos. I hate it when a review tells me "there's something here for everyone," but I can't think of another way to say so.

Opening on A World Created, an immediacy of string scratchings melds a despondent churn and hollow instrumentation. Guitars mirror Zakk Wylde, but Zack Kinsey's Molotov death growl is executed perfectly amid the swirling, screeching licks and sonic spirals. And those licks develop into a majestic Norse ascent on Match, an indulgent and misanthropic dick-rub that spits, burns, and only briefly stops to breathe. The guitar is most brightly lit on Outride the Reaper with bisected density and a promised intermission that's quickly abandoned. Whew. It's hollow, it's beastly, and its highest compliments will include multi-faceted and multi-dimensional. You're quickly exposed to varying levels of influence and approach, and a band that dismisses the pigeonhole is a band you won't soon forget.

Battlestag is the disc's poster child for sludge cadence marrying power metal guitar prowess. When Vulgaari aren't pinning your shoulders to wet earth, they're burning your senses with hot smoke. Long pauses, primitive thuds, and pacing that moves between a tortoise and a skittish crack-rabbit all blend for an excellent showcase of what the band is all about. But when it's straight sludge being choked out, it's pretty fuckin' stellar. Black Mountain wastes no time in growing vile and abrasive. You'll be riddled with welts from the steady repetition, but those guitar stutters perfectly glaze the mud.

I could truly go on forever. I scribbled a mountain of notes on this release, using more adjectives than I knew existed for a Sunday Sludge feature. Slow fuzz a la Weedeater plugs and plods on 77 74 until those licks return to cleft sludge palates. Forever Roam is a swarming descent of buzzing hornets, ambitious but unrivaled in terms of stylistic blends.  You don't know if you should run or simply weep. And the pensive and observant Dirt from the Grave overlooks the pass to assess a terrain obliterated over the first 8 tracks. The unsettling clamor forms the perfect end of times, you might say.

I can't find a red flag here. Vulgaari break from the pack and serve every metal fan a dose of all they've ever needed. There's no picking and choosing, no sampler pack. This is stoner-sludge-doom kissed with melodic power metal, all beautifully realized and well-executed. The steady burn makes you forget the ache, while the licks simply daze and astound. The next time some pretentious black metal prick in a Behemoth t-shirt wants to attack your patches or dismiss Post Progressive Blackened Avant Thrashgrind Thallcore, perhaps he's just asking for you to introduce him to Vulgaari. Immediately after you punch him in the face.