Sunday Sludge: Clamfight - "I Versus the Glacier" 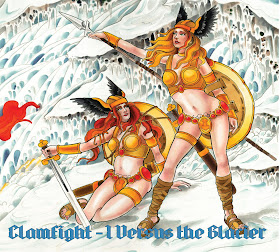 It's easy to post a meme to your facebook wall that says "Live Life With No Regrets." Well, let's be serious. I think we've all looked into our past and wondered what the fuck we'd been thinking at the time. The Butthole Surfers taught us to regret doing something rather than regret NOT doing something, but that's exactly the net I fall into. I regret ending that last sentence with a fucking preposition, but what I regret NOT doing is starting a band with three of my high school buddies fifteen-or-so years ago. I regret NOT frying my Stratocaster and Peavey box amp instead of watching Beaver and Butthole on MTV. I regret going to college and NOT rolling in the glamorous pussy that comes with stoner-sludge stardom.

Alright, Clamfight play "music for fat dudes and the buxotic women who love them," but I doubt they're left with any regrets of what they started in a basement back in 1996. Following up the fucking killer 2010 release Volume I, Clamfight return this Tuesday with I Versus the Glacier, an ambitious and groove-swollen stomp toward stoner-sludge immortality. Expanding and improving as they unfold, each of the nine tracks are sharply realized and delivered with impossibly-patient timing.

Icy drones spiral into dense, tightly-spun rhythms on The Eagle. Monster riffage manages to peel off the stink for a brief spell with a cool breeze, but the premier-caliber stoner-sludge stomp paces into a confident gallop. The descent of sludge crafts a mudslide that doesn't begin to showcase all the disc offers, leading into a triptych of sped-up shred and sticky thunder. Clamfight comparisons to C.O.C., Orange Goblin, and High on Fire only hold so much merit. What rests between the bookends is a litany of massive promises followed by gargantuan delivery.

Sandriders can't shake the thickness, but the buzz/slice/buzz floods your home and spits at rescuers. The hollow swarm of guitar splices on Shadow Line pulls you from questions on how Andy Martin balances violent drum crushes with poignant, weathered vocal observation. And on I vs. The Glacier, Clamfight discover their cool stoner swing betwixt sticky storm choruses. Listeners welcome the icy time warp warbling and flirtation of doom, exhaling until squeegee plucks graduate to death knell sirens. Are you alright, man?

Clamfight did their best to wear you out, but the disc's back end is what's impossible to dismiss. The repetitive, deliberate River of Ice is slower but hardly subdued. Spacy riffs marry hazy backdrops as crunchy sludge peppers your grandma's panties. On the album's most complete track, Martin's vocals shine and the band's tempo is perfected. Riffs are choppy and the increasingly expansive elements work together to strap on a leather mask and face the wind. The implosion of Mountain is absolutely massive, grinding slowly on a hitch of Goliath's shoulders. Dusty guitars push to the forefront and steer straight through walls.

The closing tandem of The Green God of Yag and Stealing the Ghost Horse may be the finest pairing we feature in all of 2013. That's a bold statement, but the drawn-out hum of Yag and Horse's sonic juxtapositions are fucking incredible. Superior rhythmic movements on the former's instrumental unraveling marks a baring of soul. Stoner-buzz cadence sharpens under riffs that fistfight and shake trailers. Yag easily holds some of the collection's most beautifully realized concepts. And as for the seven-minute denouement that is Horse, this is the perfect encapsulation of all that Clamfight's been over the last decade. Crafting a field of electric and eclectic heaviness that teems with ingenuity and invention, their sound continues to fester. The grit masks the improved production, leaving no trace of cleanliness or complacency.

Developing a pulse all their own, these songs flee their captors and discover themselves. There's a deceptively sticky catchiness, but don't you dare call I Versus the Glacier accessible. Swooning and swaying through burning lands, these Jersey sludge mongers exercise a militant focus hidden beneath gooey porch treatment solos and sludge stick-ball passions. Shifting and shredding is a scratch to the surface. Carve underfoot through several layers of milk and mire and it's easy to dream skyward at these cumulonimbus assertions. Clamfight are just hitting their stride, and they don't have to regret a single note on Glacier. But you? You'll regret passing it up. 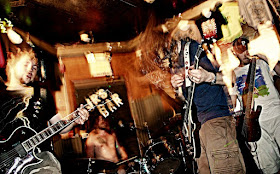