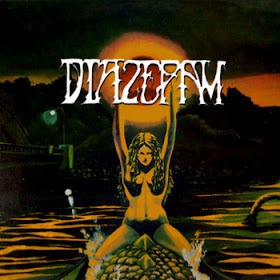 Well, the fuckin' holidays are here! Maybe you've got a few days off work, maybe your spoonfed kids are gazing at the stack o' gifts under a dying, poorly-lit tree, and maybe you've got just enough bourbon in the cupboard to choke down all the stupid rituals handed to us by our parents. But for those of us who struggle to "Keep Christ in Christmas," there's hope in the form of free sludge metal downloads. A little stoner-sludge merriment boosts the buzz, and the creepy cousin you only see once a year won't come near your bedroom if you cloud it with filthy thickness.

Careful with that booze, Weezy. They'll tell you "Do not drink alcohol while using Diazepam." Well, fuck that! These four Idahoan sluggers caught Heavy Planet's eye back in the spring with a demo presenting what Reg called "heavy as tar riffs, slow as molasses rhythms, and regurgitated vocals." Well, the year's nearly run its course and I couldn't let another week pass without featuring the band's dense, heady Demo 2. Five tracks of total fucking saturation is enough to pass me through the holiday push, but the crunch and swagger is also gonna keep me tuned in on whatever Diazepam has dialed up for 2013.

Buzzing with flies and chewin' on tainted glass, Sunn of Skam is shit-slung sludge opened low and fuzzy. The track boils and burns while Drew's vocals do as much to cake and crust the sound as any instrument could ever promise. These tracks are so suffocatingly dense that you'd be right to accuse Diazepam of malevolent sadism. Listeners are held underwater on Ancestor Worship. Throw your hands skyward and scratch all you want; the steady pick-up and evolved nod to Sabbath will put a swagger in your stagger. Your body's gonna move involuntarily, and this time you can keep a straight face when you tell girls "no, it's not a tic!"

The riff-wrangling hasn't been left behind this time, evidenced on Sunn of Skam and the pissed and dripping Weak Fist, Sleight of Hand. Stomping through a town square as mothers cover their children's eyes, this violent trudgefest is slow and deliberate, bloodied and pulsating through thick fur. But the gritty desert-wind solo steals top-billing. Blight Hard's thick club swings mercilessly, a slow-motion invasion of cool headbangs and bouncing bass toils. The track's evolution toward toolshed stoner-doom is the perfect cadence on the demo's best track. Hitting below the belt and swirling with dusty, coughing kick-ups and a vocal echo that demonstrates confidence and progress, it's hard to accept Diazepam have existed only 13 months.

I was drawn to this today. The approaching Christmas chaos brewed the perfect need for some sooty, down-tempo "vallies." Taking heavily from sludge titans Iron Monkey, Grief, Weedeater (Scabbed Up is a dirtier Woe's Me), and EYEHATEGOD, there was simply no avoiding Demo 2. Where the trailblazers flung their shit is where Diazepam sniffed for scraps. Keeping things thick and muddy, however, is merely half the fun. These five tracks seem to resonate a bit longer, like sippin' Boone's Farm in the basement with your uncle's too-young-for-him fiancée. She's got a few more miles than the girls your age, but she knows a thing or two that're gonna keep her on your mind all winter. Diazepam have found the formula to ease this season's lament: ignore the warnings.