The year has flown right by, at least for me. It's been so much fun getting to know the best new music on the planet in an up close and personal manner this year. Of the many wonderful characteristics of stoner/doom/psych/retro rock there is one that just flabbergasts me, and that is how much new, original, MOUTHWATERING music is generated each year. Granted I've only been truly engaged for two years now, but I am staggered by how much new and incredible music I've found. There is so much that it's hard to showcase it all on Heavy Planet. Today I am showcasing three instead of the usual two. There have been a lot of 'best of' lists on Facebook the past several weeks and these 3 albums tend to make a majority of those lists, whether they be from fans, reviewers, or musicians. All three are from the ubiquitous and incomparable Small Stone Records label. Small Stone has cranked out more than their fair share of great, new music this year, and if rumors are any indication next year will at the very least match that output if not top it. Today we get to hear the incredible music of Örkellijunga, Sweden's Skånska Mord, the down home rock of New Haven, Connecticut's Lord Fowl, as well as the treasure chest of metal from Paris, France's Abrahma. Plug in, sit back, rock out, if you please.
~~~~~~~~~~~~~~~~~~~~~~~~~~~~~~~~~~~~~~~~~~~~~~~~~~~~~~~~~~~~ 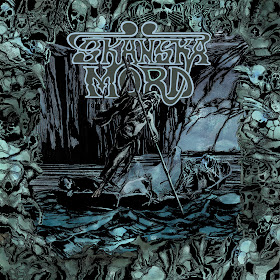 Skånkska Mord are somewhat rare as a band because all members are from the same hometown, and while they didn't all start together as Skånkska Mord, they took full advantage of the demise of  former bands to form a new, tighter, more highly skilled and motivated band, one able to meld their seemingly disparate and individual sounds into something quite strong and exciting, something powerful and intoxicating, something that more rightly expresses the artistic qualities within each member of the new formation. They've now been together since 2006 and have generated nothing but music of the highest timbre and quality, culminating to this point with "Paths to Charon"

They play a heavy, low tuned, and vibrant brand of psychedelic rock that slings the fuzz while wrapping a haunting and dark blanket of sound over magnificent, perfectly matched vocals from Englund and Bengtsson. The guitar work from Berglin and Englund is nimble and unforgiving as they inexorably carve their way through a thick, dense, nirvana of sound, all the while accompanied ably by Carlsson's monster bass and Jönsson's heavy caliber percussion. 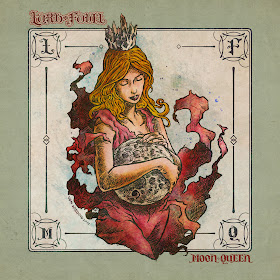 Lord Fowl's music is an extension of some of the great, great rock of the 70s, with a slight southern tinge despite its creators hailing from the heart of yankee country. It's as if the decade had never ended, but instead endured through the ensuing three and half decennium, spawning a surfeit of incredible, delectable music.

Lord Fowl do not spare the riffs on this jam packed album. Guitars are salient, plentiful, and unburdened, spawning generous amounts of fuzz laced, down tuned distortion intertwined throughout with hot, searing solos and scorching riffwork. The vocals are perfectly matched to the music, bearing the slightest of raw edges, while percussion and basswork massivley encompasses all, expressing perfectly Lord Fowl's melodies of magic. 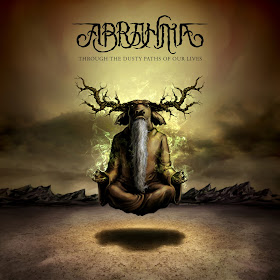 ABRAHMA - "THROUGH THE DUSTY PATHS OF OUR LIVES"

This Parisian foursome have delivered a treasure trove of bright shining jewels, perfectly cut, formed to perfection, exquisite in composition and detail with "Through the Dusty Paths of Our Lives", an album of 15 catchy, heavy, clever, intelligent songs.

with help on the album from Ed Mundell of Monster Magnet notoriety playing solos on "Big Black Cloud", as well as the cover artist for the album, Alex von Wieding, who also is the musical mastermind behind Larmon Clamor, contributing the song and vocals for "Oceans on Sand . . . ". How cool is that?

There is plenty of fuzz and low tuned music laid expertly over clever and often ingenious melodies generating a climate of fun and fury for riffs and solos, vocals and rhythm, chorus and refrain in this stoner rock fest of an album.