In Case You Missed It: Witchcraft - Legend 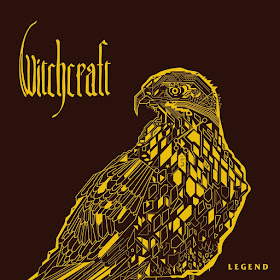 Despite the fact that we do our absolute best here at Heavy Planet to stay on top of the unbelievably vast array of tuneage that comes our way, on occasion even we manage to let an amazing album slip through the proverbial cracks.  Well no more!  With this segment, I intend to sweep up those albums that get left behind.  Consider this feature to be the equivalent of a cleanup hitter in the Heavy Planet lineup.  If a few months (years even?) go by and a worthy record goes unnoticed, this is where it’ll receive its proper day in the sun.  From now on, those lost records have a voice and that voice will be called In Case You Missed It!

This inaugural edition of In Case You Missed It is a perfect example of what I’m trying to do here.  You see, as 2012 rapidly comes to a close, I’m scrambling to decide which albums will find a place on my hallowed top 10 list and I inevitably realized a major oversight.  How could one of my favorite records from this past year never have been given a proper review here on Heavy Planet?!?  With three months having passed since its release, I think it’s high time we give mention to the Witchcraft reboot that is the band’s excellent fourth album, Legend.

Why a reboot you ask?  Well you see a lot has changed for Witchcraft in the five years since the release of their last album, The Alchemist.  For starters, the band found a new home in metal mega-label Nuclear Blast Records.  Furthermore, this ain’t your big brother’s version of Witchcraft.  In fact, the only band members returning from the last album are vocalist Magnus Pelander, who apparently decided to drop guitar from his resume, and bassist Ola Henriksson.  With the addition of guitarists Simon Solomon and Tom Jondelius and drummer Oscar Johansson (better known as Pezo from Truckfighters) this is a re-tooled, five-piece version of Witchcraft.

Of course, external to the band’s lineup, the musical landscape has also shifted during this last half decade.  Let’s face it…retro-loving 70’s worship, for lack of a better genre title, has nearly reached a point of oversaturation, as more and more bands hit the second hand stores in search of bell bottoms and analog recording devices.  So leave it to the band that seemingly started the retro-craze nearly 15 years ago with their Pentagram-inspired debut to jump off the bandwagon just as everyone else seems to be jumping on.  New label…new members…why not a new sound to boot?

And that brings me to Legend.  To say that Pelander and company decided to go in a new direction would be an understatement.  Gone is that pseudo-vintage tonality as if the album is being played through the dusty record player you found in your granddad's basement.  If you're at all familiar with Witchcraft, you'll notice the difference immediately.  Produced by Jens Bogren (Opeth, Paradise Lost), Legend is crisp, clean and in your face.  And nowhere is it more apparent than on the first track "Deconstruction", which teases with a traditional doom riff that is soon abandoned for a more uptempo pace more akin to a modern take on Thin Lizzy than Black Sabbath.

Another change you'll notice on the album's opener is a shift in the band's lyrical content.  The tales of magic and murder have been replaced with a more mature sense of frustration and genuine distaste for modern society, from government to organized religion.  In fact, Pelander's first line on Legend is this gem: "Say me, Mr. Officer…what is it that you want from me?…I'm just another brick in this fascist regime…society."  And before I stop pissing myself over Magnus, let me also just throw it out there that this dude has one hell of a set of pipes.  Don't get me wrong, you can hear it throughout the album, but if you need just one example, check out the latter half of "Flag of Fate" where he sings the line "I saw it coming" with a sort of vocal vibrato technique that you simply won't hear anywhere else in this genre of music.

Speaking of "Flag of Fate"…it is anthemic…it is brazen…and it is catchy as fuck.  But not as catchy as "It's Not Because of You" which is one of those songs that you'll hum all day after hearing it.  "An Alternative to Freedom" is an atmospheric disparagement of religion that opens with a mind-numbing slide guitar that ultimately gives way to a breakdown wherein the three newcomers to Witchcraft finally step to the forefront.  The guitars interweave mercilessly while Johansson batters his drums, reminding us all that he really goes by the moniker Pezo.  "Ghosts House" is the centerpiece of Legend and finds Witchcraft venturing into the multiple tempo shifts of prog-rock further shifting the limelight heretofore dominated by Pelander to the new dual guitar attack of Solomon and Jondelius.

Finally, with "White Light Suicide" all five band members seem to coalesce.  The vocals start at the forefront…"cast your stone into the water now, and watch them ripples spread like poison"…but Henriksson and Johansson plow ahead with a cavernous rhythm section that nearly…I said nearly…overwhelms the guitars, but they don't and by the end the entire ensemble is running like a machine.  "Democracy" is the most vehement example of Witchcraft's new direction both musically and lyrically.  If you haven't caught on to Pelander's mindset, get a load of this.  "Fuck your heros…or screw your Gods…fuck your icons…deal with the real…your made up morals…your media fix…fuck you all…degenerative politics."

"Dystopia" tapers the tempo, with a tenderness and warmth in the guitars and vocals laid so bare that it's obviously a set up to be broken and tattered.  The song is like some acid trip wherein you're watching The Doors slowly morph into Black Sabbath.  Un-fucking-believable!  And then to top it all off, Witchcraft close their latest opus with the epic "Dead End", which showcases every aspect of what this band has become, which is to say a juggernaut.  There isn't a weak link in this lineup and if you want to hear the five components cohesively contribute to a piece of music, then listen to this twelve minute epic.  Not a second is wasted here…not a second.

Look, this is a band that has always been rooted in the classic elements of hard rock and heavy metal and that hasn't changed.  But what Witchcraft have done with Legend is to stop paying tribute to the past and to start paving the way for the future.  This feels new and fresh without sacrificing quality or substance.  Legend is a rebirth for Witchcraft in terms of style and musical direction and it gives notice to the rest of their retro-rock brethren by thrusting a genre that has arguably become overpopulated into a whole new direction.  But of course, I only tell you all of this…in case you missed it. 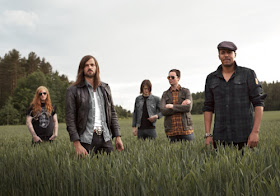