New Band To Burn One To: SEA OF DISORDER 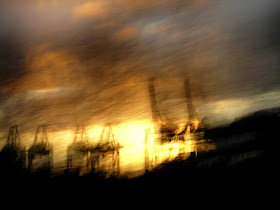 We both were born in Salzburg / Austria where we still live and create our music. Our main influences come from Doom, and we wanted to create melodic, atmospheric but also rough and sometimes brutal sounding mixture of our own style. We are only two persons, and played all the instruments ourselves, did some drum recordings in our hometown Salzburg first, and then recorded the guitars, bass and keyboards in our own little ‘studio’ ( also known as: at home ).

We also feature two guest Musicians on our first EP: Loic Rossetti who sang on the last two [ The Ocean ] Albums ‘Heliocentric’ and ‘Anthropocentric’ appears on Track 3 & 4 with some vocals, which was a big honor to us! Chris Huber from Salzburg, who is mainly known as ‘Wach’ with his own Ambient / Noise Project and released three Albums on various Labels, made the Intro Track for Song 1 & 2.

"With an outpouring of wave after wave of crushing guitars and cymbal crashes, this two-member band from Austria creates a beautiful yet devastating piece of atmospheric post-metal sludge. The band sets the tone by using oceanic sound effects and soft guitar passages in preparation for the release of what lurks beneath. Once the beast has risen a huge guttural howl is emitted creating a towering storm filled with furious and erratic drum fills. The story ends with the epic album closer "Chapter III ~ Reinvigoration / Thalassophobia". This is music that opens your mind, creating a vision that lets you escape the realities of our sometimes mundane existence."