New Band To Burn One To: MERLIN 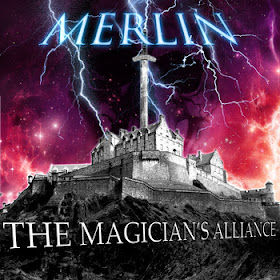 Imagine a world besides yerown. A world with no Industry. A world with no Electricity. A world where magic and law were the same, and science was in the stars. Imagine yerself walking in a dark, grassy field, in the middle of a forest with trees so immense, you cannot see the sky. Fog covers the ground beneath yer feet, and glowing mushrooms tower above. Will 'o' Wisps fly around you. There's a st ram up ahead, pouring into a small pond of glowing blue water. The color is amazing. You see a nearby furry creature drinking from it. Suddenly it hears a sound and runs. You remained silent, and turn around. Suddenly a black armored giant, with two glowing green eyes is running toward you. His face covered with a skull. You don't know what to do. Then, from behind you, coming out from the stream, a naked woman, more beautiful than anything you've ever seen in yer life hands you a staff of gold. You take the staff and aim it towards the giant. You utter four words you've never heard of and fire spews from the crystal ball at the end of it. He explodes. You turn around and she's gone. You wake up.


Merlin is like that dream, only you'll never wake up.

"This is probably some of the most fucked up shit I have ever listened to, and I mean that in a good way. I have always enjoyed music that goes out of the boundaries and makes you perk up and say what the hell. This band from Kansas City simply known as Merlin is the ultimate head trip. Their music is a mixture of eerie sound effects, doomy passages, creepy spoken word and middle earth-like instrumentation. The band has only been together for eight months but have managed to record a full-length album, an EP and a live album which are all currently available on their Bandcamp page. Check them out, but be prepared for something utterly unique."