New Band To Burn One To: GIZA 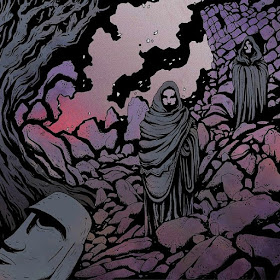 
Giza was formed in March of 2012 by Steve Becker, Trent McIntyre, and Richard Burkett with the goal of writing loud and massive instrumental music. In May of 2012 Giza recorded 6 songs with Matt Bayles (Mastodon, Isis, Minus the Bear) which will be self released in January of 2013. Giza is currently playing shows in the Pacific Northwest.

"I have been on this huge instrumental band kick as of late, so when I received this band the other day it sent my adrenalin soaring. The music represented on this debut full-length from Seattle's Giza is a moody, dark and desolate journey paralleled by the cloudy and rainy climate of the Pacific Northwest. The heaviness continuously explodes amidst meandering tempos, down-tuned guitars and crushing aural pleasantry. There are no guitar acrobatics or soaring vocals to be heard, just what I would call heavy as fuck chill-out music. My favorite track "Hour of the Bullfight" is introduced by the mellow intro of "Interlude", once the intro subsides, a heavy aura surrounds you with monsterous tones and savage drum fills. The playing is tight, the production is stellar and the sound is massive, combine that with some sweet album artwork and "Future Rains" by Giza comes out a winner. I highly recommend this shit for anyone jonesing for some post-apocalyptic instrumental sludge metal."

For fans of Mastodon, Isis, Russian Circles and Minus the Bear