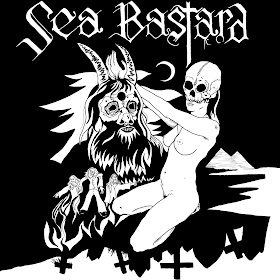 I don't know about you assholes, but I love my sludge served with a thick plate o' doom. Sometimes there's little to distinguish between the two, so we get those Sundays where we need to open the sludge pigeonhole and shed even more epic darkness. Today we balance the angry with the depressive, the filthy with the haunting, and the steel-toed with the horned. And I'm wasting my time even outlining such distinctions; something this good just needs to be handed to you like a slow slap on the ass.

When Brighton doom giants Jovian and Funeral Hag saw their demises, the foundation for Sea Bastard was laid out as the next logical course. Brewing an unnaturally slow, hauntingly despondent atmosphere centered on the riff and balance by the groove, Sea Bastard's long-buzzing passages are marked by gargantuan stoner-doom explosions. On this self-titled release, the band steals over an hour of your girlfriend's cuddle time with plodding bong-rip rhythms blanketing five tracks, none of which manage to dip below ten minutes. Ambitious? Hardly.

There's a molasses-urgency Sea Bastard exercises on these dusty, drawn-out slabs. Smashed by Sunlight is the thunderous, painfully slow opener loaded with sacrilege and tales of malevolent beasts. Unbelievably heavy and ever-evolving, the shifting tempos demonstrate a commitment to allowing fears to emerge rather than brazenly extracting them. Ian Montgomery's scratching, pained pleas grow into ethereal growls, while thudding thickness permeates your air and challenges the bong smoke. You'd better clear your calendar.

Stomping without relent or regard is Ramesses' Revenge, a quicker, draconian fuzz party. Riff-soaked fret abuse is no match for the medieval groove, lifting further toward a grinding pendulum swing sent to kill. The mood dips straight to hell, just as you expected. The eerie buzz of Psychic Funeral is ominous and unsettling, slowly making its way toward an awesome cadence abrasion. The track is less inviting, more antagonistic, and George Leaver's double kick-drum is an awesome change of pace. Demonstrating not only range but also balls, the band keep the track thick and furry until Oliver Heart's sandy guitar wails and weeps into a slow, sad roll. Ultimately, Psychic Funeral lumbers, staggers, crawls, and collapses under itself.

The title track chops and snaps with true doom traditions, upheld with escalating riffs and misty cymbal taps. This is as primitive and guttural as things get. The fuzzy haze becomes a blanketed envelopment, grinding and consuming with hovering buzz and Steve Patton's bass plucks. The entire meltdown of sound is compelling and demanding, an effective lead-in to Masters of Unreality, the disc's sixteen-minute closing opus. The slow, somber sludge oozes low and filthy, marrying the rainy-day doom in escalating progressions. On an endless sea of grinding and plodding riffs, a broken man buzzes and burns toward his demise. Sticky chaos encircles, gravity and fear become paramount, and the crashing wall of sound whitewashes all that is and was on this stunning denouement.

It won't matter if you examine each track based on its own merits or spin the album as a whole; every note is laced with numbing haze. Sea Bastard borrow from their pasts to challenge listeners and honor their influences, fully immersing themselves in stoner-doom tar. The tracks are long, the riffs are staggering, and there's no patience required. You're not trying to get out or get away. You're trying to make this last even longer. Guess you'll have to hit repeat.